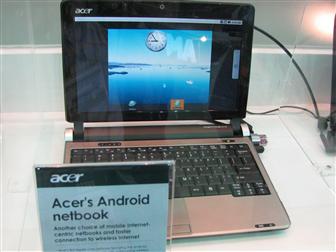 Some people, particularly the open source enthusiasts, are putting a negative spin on this story, but I kind of like the news from Digitimes that Acer’s plan to introduce netbooks running Google Android will include the ability to dual boot to Windows.

First, I generally lean positively toward dual boot systems. Sometimes you need something light and fast. Other times you need the big, heavy OS. Also, instead of looking at it like Windows intruding on Android, I look at it as giving Windows users exposure to a new operating system, which should receive a lot of use on-the-go. On the other hand, I don’t imagine Microsoft is doing cartwheels over Windows users getting an opportunity to know a mobile OS that isn’t Windows Mobile. All sorts of ways to view this.