While Acer Iconia Tab A200 users have started to see Android 4.0 Ice Cream Sandwich upgrades hit their devices recently, owners of the Iconia Tab A500 will have to wait just a little bit longer. According to Acer Australia and New Zealand, Android 4.0 won’t be available to the original Android-powered Iconia Tab A500 until April:

Great news, everyone! We’ve just got confirmation from HQ that the Iconia Tab A500 will be getting Ice Cream Sandwich in April. No exact date yet, but we’ll let you know when we have it. What are you looking forward to most in ICS? 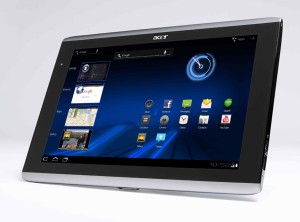 Acer America has also confirmed that Stateside owners of the Iconia Tab A500 and A100 will also be seeing Ice Cream Sandwich sometime in mid-April; exact date has yet to be confirmed.

The Iconia Tab A500 launched alongside the rival Asus Eee Pad Transformer and both tablets compete in the same sub-$500 price point when competing tablets like the Motorola Xoom had launched at a more expensive price point. Both tablets offered dual-core processing at the time, a high resolution 10-inch display, and solid build quality.

However, since the Iconia Tab A500 launched, inexpensive 7-inch slates have been nipping at Acer’s and Asus’s product line, including the Android-powered, but heavily skinned, Barnes & Noble Nook Tablet and the Amazon Kindle Fire slate, priced at $250 and $200 respectively. The tablet market has become increasingly competitive with the Apple iPad dominating the high-end segment and the Amazon Kindle closing in on the budget-friendly category.

Acer is also rumored to be working on a high-resolution tablet with a 1080p display in the form of the Iconia Tab A700, which may debut with Android 4.0 Ice Cream Sandwich out of the box.