The  Iconia Tab A200 will be among the first tablets to receive an update to the newest version of Android in the form of Android 4.0 Ice Cream Sandwich. The update is starting to roll out now, and if you haven’t received notification of the update, you can manually pull the update from Acer’s servers by going into your tablet’s settings menu, going to ‘About tablet,’ and then go to ‘System update’ to ‘Check now’ for the update. 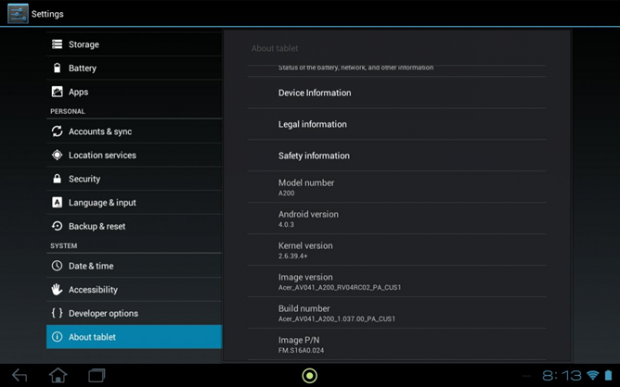 The tablet launched earlier this year around the time of the Consumer Electronics Show. At launch, the Iconia Tab A200 debuted with Android Honeycomb, and Acer had promised that Android 4.0 Ice Cream Sandwich would be available in February as an over the air update. It looks like Acer is making good on that promise.

A few days prior, a leaked Android 4.0 Ice Cream Sandwich firmware update was found on the Internet, and this official build carries a different number than the leaked version. It’s unclear what the differences are between the two different builds.