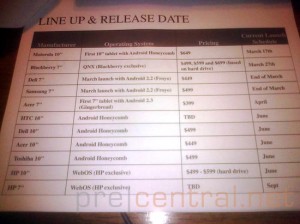 In addition to HTC bringing a 10-inch slate and the HP webOS TouchPad pricing leak, it looks like a slew of tablets will be getting released this summer for under $500 from Acer and Toshiba, according to a leaked document obtained by PreCentral.

In April, Acer will release a 7-inch Android 2.3 Gingerbread tablet with dual-core processor and with the same high resolution 1,280 X 800 pixel screen that’s found on the 10-inch Motorola Xoom tablet; having that many pixels crammed onto a smaller display will make the 7-inch Acer Android tablet appear sharper than the Xoom. The tablet was previously announced with Adobe Flash 10.1 support, a front-facing camera, Dolby sound, and 3G support, though it’s unknown if this one will be a 3G model or a WiFi-only model at the astounding $400 price point. At that price point, Samsung’s only now rumored to be re-releasing its Galaxy Tab in a WiFi-only flavor with lower specs–single-core CPU and lower resolution 1,024 X 600 display.

The leaked document is part of a retail roadmap from a major, but un-named retailer.