While the new year may bring with it resolutions of healthier diets and lifestyle, Acer’s recently unveiled Iconia Tab A200 will go the opposite as it is promised a healthy consumption of Google’s Android 4.0 Ice Cream Sandwich OS come January 2012. The budget-friendly tablet eschews cutting edge specs, like NVIDIA’s latest quad-core Tegra 3 processor with multi-core graphics, in favor of keeping things more affordable with a dual-core Tegra 2 chipset. 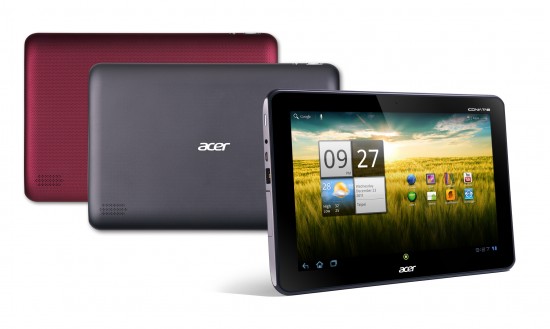 The Iconia Tab A200 will be a 10.1-inch slate will launch with Android 3.2 Honeycomb. The slates have already begun shipping to select countries, according to Acer, and will pack in a custom UI called the Acer Ring UI. There’s also an easy option for capturing screenshots as well.

The tablet will pack in a micro SDHC card slot for expansion along side either 8 GB or 16 GB of on-board storage, a full USB slot, and 1 GB RAM. The battery is good for 8 hours of continuous video playback. The Iconia Tab A200 will have a front-facing 2-megapixel camera for video calls and self-portraits, but omits a rear-facing camera to keep costs down.