The Acer Iconia Smart Android smartphone is another smartphone, like the Dell Streak 5-inch, that straddles two different form factors and could be used a tablet or a smartphone. With a 4.8-inch display of a unique aspect ratio for the Android device, Acer is calling it ‘100 percent phone’ and also at the same time ‘100 percent tablet.’ 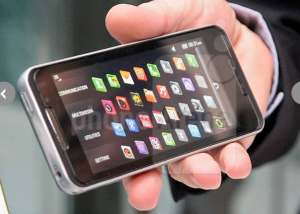 In fact, the panoramic display is also similar to another un-released prototype. That device is the LG GW990, which was an early concept device for Intel’s Moblin OS, an operating system that was later scrapped and folded into the MeeGo project as a joint development effort with Nokia.

The Iconia Smart is powered by a single-core Snapdragon 1 GHz processor and is theoretically a 3G smartphone, though the 14.4 Mbps download and 5.76 Mbps upload speeds would be classified as 4G by AT&T in the U.S. using the HSPA/HSPA+ protocol. Unfortunately, however, as it’s a tri-band 3G smartphone that doesn’t include the proper AT&T radio frequency, the device will most likely not be released in the U.S. unless Acer makes a variant compatible with AT&T’s network.

The device was spotted again on the show floors of Computex by Phandroid.