Addicted To Your CellPhone? New Study Says You Aren't Alone 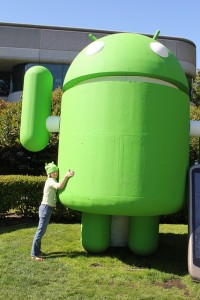 Smartphone Love to the Extreme

Do you get antsy if you can’t take your smartphone out of your pocket and check in on your digital life? If you’re anything like me, and the college students in a study performed at Kansas State College, the answer is a resounding yes. The study looked at the “Mobile Affinity” we have for our smartphones and found that for many of us, being unable to open our smart phone is akin to being unable to spend time with a family member or pet.

To figure out why we have such an attachment to our smartphones Dr. Esther Swilley of Kansas State surveyed students between 19 and 24, 99% of which owned a cell phone of some kind. Based on feedback and observations the study was able to conclude that the enhanced functionality of our smartphones as well as the personal nature of these devices lead to our kinship with iPhone, Android and BlackBerry devices.

The next time your significant other reaches for their phone instead of your hand you can blame Steve Jobs. The iPhone app store kicked off an app happy craze which has led to an increased mobile affinity with our cell phones. No longer are phones a simple tool for calling or texting, but instead they are our connection to communities, games, entertainment and knowledge.

Unlike computers, which are often shared among members of the family, or with visiting friends, our smartphones are much more personal. Dr. Swilley’s study found that, “individual ownership is a really big deal for people.” The individual nature of smartphones is no more evident than when your friend gets the latest and greatest device. Most of us will ask to check it out, but for the most part we’ll flip through home screens and open up a webpage, being careful not to open up apps that feel rather personal in nature. It’s been my experience that when I check out someone else’s phone, or they check out a review unit I have on hand, we generally ask permission to open up apps — even those as innocent as the phone app or a new game.

Interestingly enough, the study found that while we have an affinity with our mobile devices, which some may call an addiction, the college students in the study reported that their phones offered little in the way of self-expression. It seems we have moved past ring tones as a form of expression and the respondents are already over cases as a way to express themselves. Perhaps the future will be a screen on the back of our smartphones which plays a running slideshow of your recent Facebook photos or album art for recent song purchases.

Are you addicted to your smartphone? Answer our question on Facebook to let us know how long you can go without looking at your iPhone, Android, Windows Phone 7, Web OS or Blackberry!