Last fall Adobe released a suite of mobile Creative Cloud apps to go along with Lightroom Mobile for iPad, which was released last spring. Now the migration to Android begins with the first of the Adobe Creative Cloud mobile apps for Android with Adobe Lightroom Mobile for Android. Now Android phone photographers can take photos, organize and edit them and then automatically sync them to the computer version of Lightroom and with a new web version used for storing and sharing images. These mobile photographers can also do some field triage with photos taken using their phone’s camera, or a dedicated camera. However, there are some limitations compared to the desktop version of Lightroom. We’ll share how the mobile version will limit what users can do, but also explain the great features available now on Android making it worth the subscription to Creative Cloud.

The grid view of a collection in Lightroom Mobile for Android

Should Android phone users consider signing up for one of the Adobe Cloud Creative subscriptions? They start at $10/month for Lightroom and Photoshop only and cost as much as $50/month for all the Adobe applications. Adobe offers other subscriptions with monthly or annual prices falling between these two subscriptions, depending on the user’s needs and circumstances. 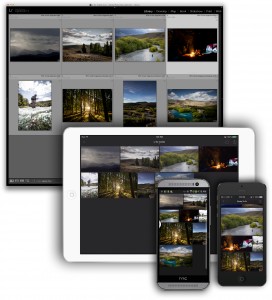 Lightroom Mobile for Android syncs with computers, the web, and iPads or iPhones.

Lightroom Mobile for Android includes three key uses. First, the app lets users automatically import and sync their Android phone photos with the desktop version and a new web interface. The app will import photos from the Android phone’s photo gallery into a new collection inside Lightroom Mobile for Android. Set the app to automatically sync those pictures over Wi-Fi only or using both Wi-Fi and cellular data.

Photographers can triage their photos by tagging them, flagging them and rejecting them. Photographers do this to call attention to special photos while marking others as bad shots and not worthy of edits. Flag a shot and/or add a 1 through 5-star rating to shots.

Second, the app offers plenty of editing features. Experienced Lightroom users will recognize the available edits. They show up in the Basic editing panel on the desktop version. The editing features come in three tabs at the bottom of the screen. The first tab includes the following:

As any photographer will note, those are nearly all the edits found in the Basic panel on the desktop version and accounts for probably 90% of tools photographers use to edit shots.

Use the built-in preset filters to quickly add a certain look to a photo or used the advanced editing features.

In addition, the second tab at the bottom of the editing screen lets the user add quick filters as follows:

One downside to Lightroom Mobile for Android is the lack of free-form cropping.

The last tab handles cropping with a several preset sizes and aspect ratios. Users will notice one weakness in the Lightroom Mobile for Android cropping tool. There’s no free-form cropping. All of the cropping aspect ratios are preset. That’s a huge limitation for many photographers.

The third use for Lightroom Mobile for Android involves sharing photos with others. The app includes a Sharing button with a pop up menu that lets us save the photo to the phone’s Photo Gallery after editing. It also uses Android’s built-in sharing feature so users can open the photo with other photography apps or share it on Facebook, Twitter, Instagram or other social networks.

Lightroom Mobile for Android uses Collections. Use the share menu move photos between collections by copying or moving the image. The user can also remove photos from a collection. This way a user can take a bunch of photos and then create a new collection for some of the photos. For example, create a Birthday Party Collection and then copy or move the photos from the phone’s collection that Lightroom Mobile automatically creates when the user first installs the app.

Finally, use the Share menu to play a slide show. This makes it useful for showing off images when a friend looks on, or while mirroring the screen via a Chromecast or some other method of connecting the phone to an external display.

Lightroom Mobile for Android and the Lightroom Online

You can create collections in Lightroom Mobile and then log onto Lightroom.Adobe.com using a Creative Cloud account and access those collections. The service and app syncs photos both ways. This means a user can take photos on their Android phone and then edit, tag or rate the photo using the app. These will sync with the online version. The user can also upload photos from their computer to an online collection and they will show up on the phone app.

Syncing takes place reasonably fast, depending on the speed of the connection. It’s also reliable. This means the user can get access to their photos, even if they didn’t install Lightroom’s desktop application on a computer. Get access from a friend’s machine or a public PC at the school library. The sync process also works with collections on the computer, both Mac and PC versions.

Adobe didn’t optimize the user interface for tablets. It’s primarily a phone app. They plan to in the future, but this release only includes a phone version. It does run fine on tablets in portrait mode on the tablet.

The iOS version includes some features not yet present on Android. The way a user rates or flags a photo works differently. Also comments made on a photo on the web don’t sync back to Android yet. They do work on iOS. If someone shares a photo with a friend and the friend logs into their Adobe account and comments, those comments won’t show up yet on the Android phone.

The new Adobe DNG file format that lets users access RAW photo data on shots taken with an Android 5.0 Lollipop camera doesn’t yet work with Lightroom Mobile. They hope to include this soon. The smart previews (images of pictures on the app) do show up in a form of Adobe’s DNG, but it’s incompatible with Android’s DNG file format for now.

There’s no video support yet in Lightroom Mobile for Android. They also aren’t releasing the other mobile apps that work on the iPad, like Adobe Premiere Clip, which brings professional level video editing to the tablet.

Adobe hopes to reach feature parity between iOS and Android on both phones and tablets. Once they do they also hope to release updates to both platforms simultaneously. However, they choose not to hold back stable updates if they’re ready, so sometimes they will add features to one platform and release them on another platform later.

People who love taking photos with their Android phone and want the best photo editing, organizing and sharing system available should at least look into the $10/month subscription to Creative Cloud that gives them access to Lightroom and Photoshop on up to two computers and access to the mobile apps on Android and iOS. Lightroom Mobile makes it easy to quickly edit and share photos. The workflow of taking shots and then syncing them between a computer, their phone and the online site works beautifully, reliably and simply.