Adobe is set to role out Air 2.5 today, and it is making a big play to make its cross-platform development environment live on just about any device. As long as it isn’t an Apple iOS device. The idea behind Adobe Air is that it is an environment that allows Apps to be written once and then used across many platforms. In today’s announcement Adobe will be talking Android quite a bit including Google TV. Look for mentions of Samsung and RIM when it comes to their Tablets and handhelds, and in Samsung’s case TVs also.

Intriguingly Engadget is reporting that Adobe says that RIM’s Playbook UI is built entirely with Air.

Adobe will also be launching InMarket, it’s approach to help developers sell Apps. The idea here is that for a 30% cut of the action, InMarket will work with existing or new App Stores (except Apple). Supposedly it’s free entry to this for developers if you sign up today. 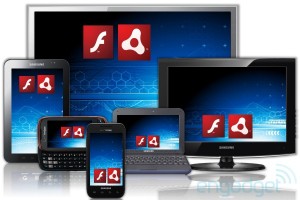