The new Adonit Snap fine point stylus for iPhone, iPad and Android adds a new trick to the stylus. It can take photos using your phone’s camera app. Pair the stylus with your phone or tablet and open the camera app. Set it up and use the Adonit Snap as a remote shutter release so you can take photos with yourself in the shot or to limit camera shake with the phone on a tripod instead of holding it.

Adonit sells the Adonit Snap for $34.99. At that price, it’s a great deal despite one issue I had while using it with the iPhone 7 Plus running iOS 10.2 beta. More on that later.

Most companies design their stylus to look like a round pen or pencil-sized device that feels like using your typical writing utensil. That introduces a problem – where do I put it when I’m not using it? Samsung tried to solve this by putting their Galaxy Note stylus in a silo built  into the phone. Microsoft tried to solve it by using a powerful magnet to make the Surface Pen attach to the Surface. 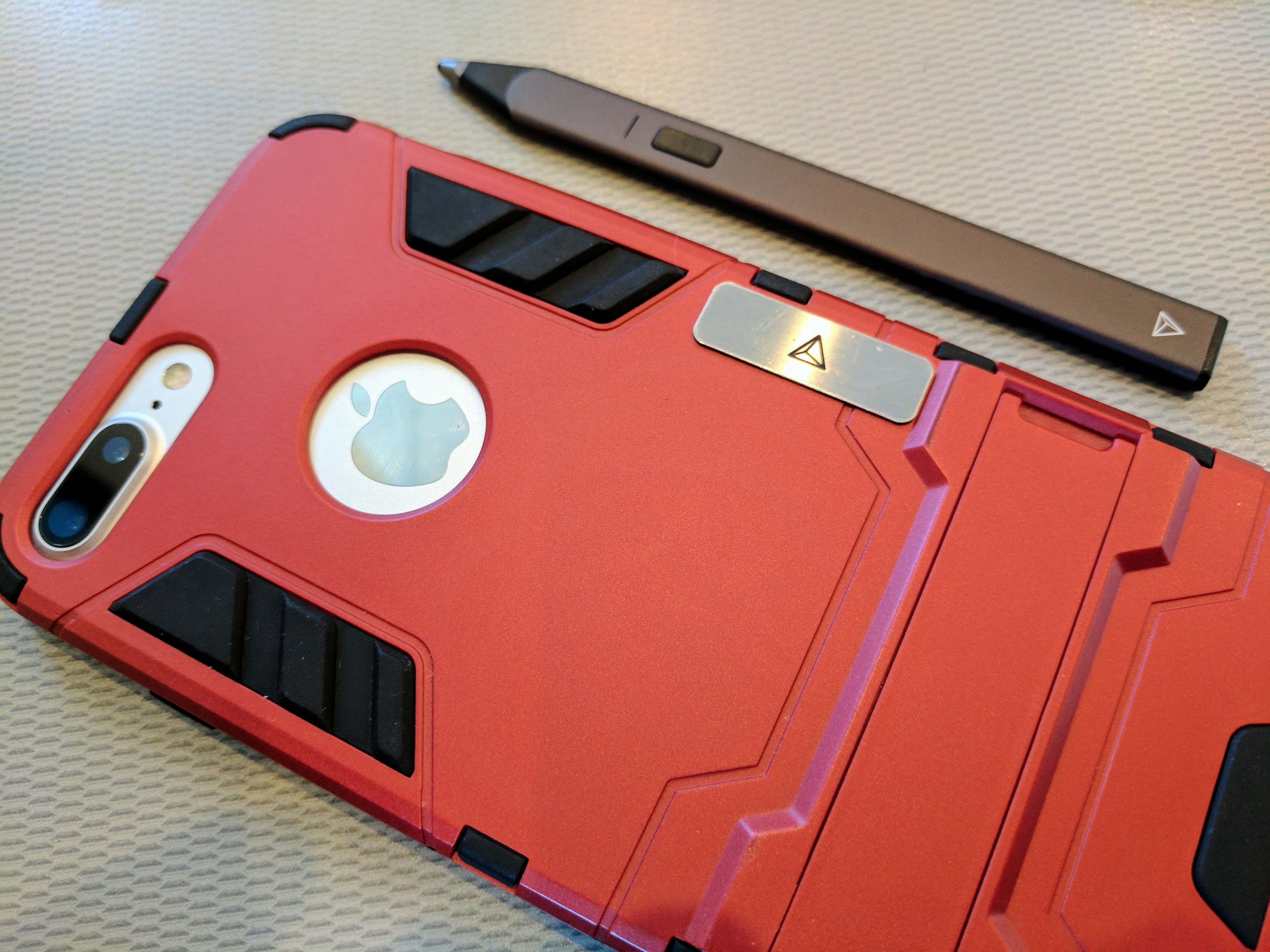 Adonit fixed the stylus storage problem with a flat carpenter pencil design and a magnet. Instead of a round barrel-shaped stylus, we get a flat stylus with a magnet built-in. The package comes with a small metal plate that has adhesive on one side. I put this on my iPhone 7 Plus case and the Adonit Snap snaps to the metal plate magnetically keeping it in place most of the time. Sometimes I pull my phone out of my pocket and the stylus falls off in my pocket or worse on the ground. I haven’t lost it yet, but I’m worried that I will. 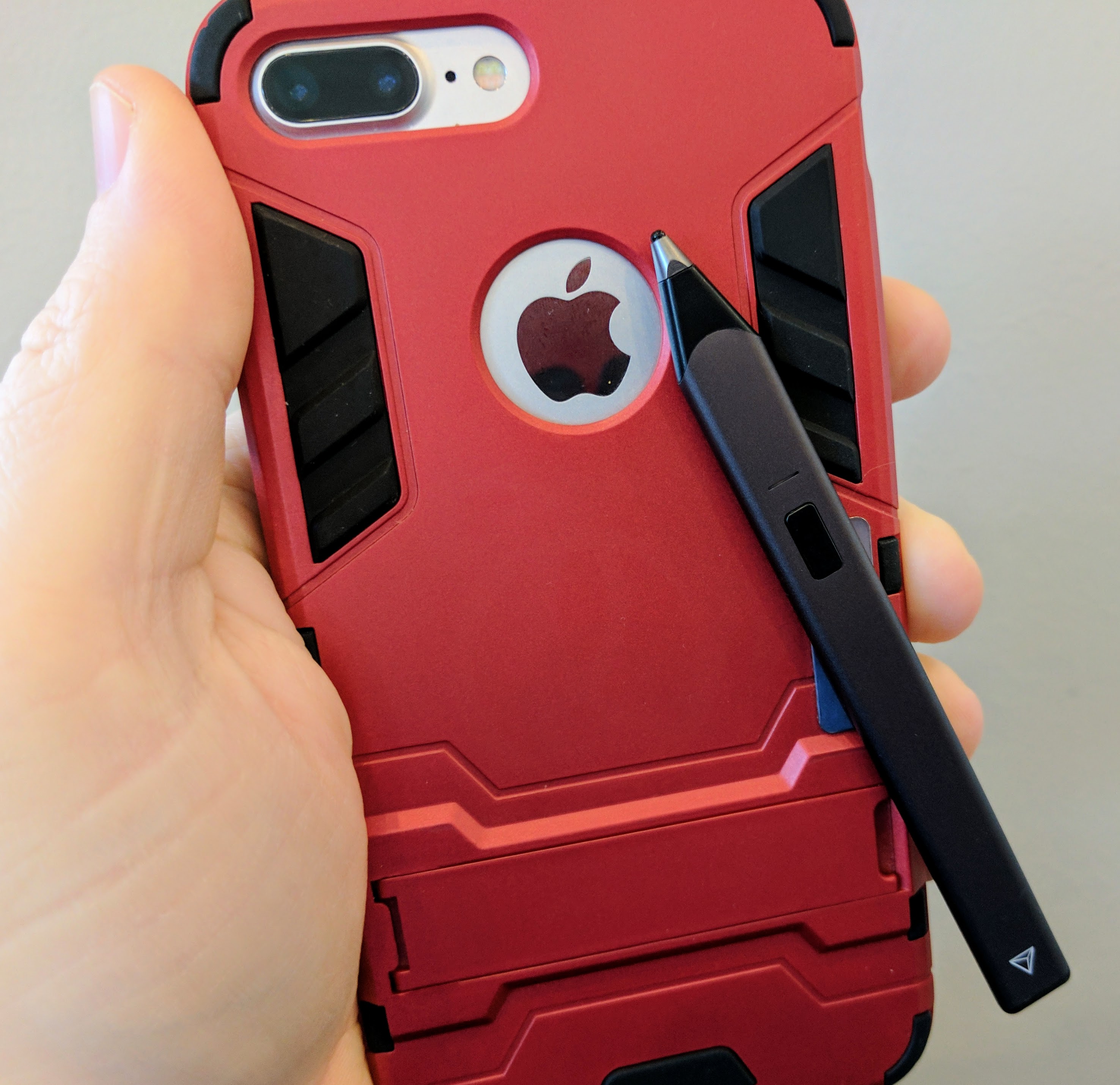 The tip of the Adonit Snap looks like a fine tip pen. There’s also a button next to an LED on one side of the flat stylus. Turn on the device or put it into pairing mode using this button. On the other end we get a micro-USB port so that the user can plug the stylus into their computer or a USB charger to charge the included rechargeable battery. 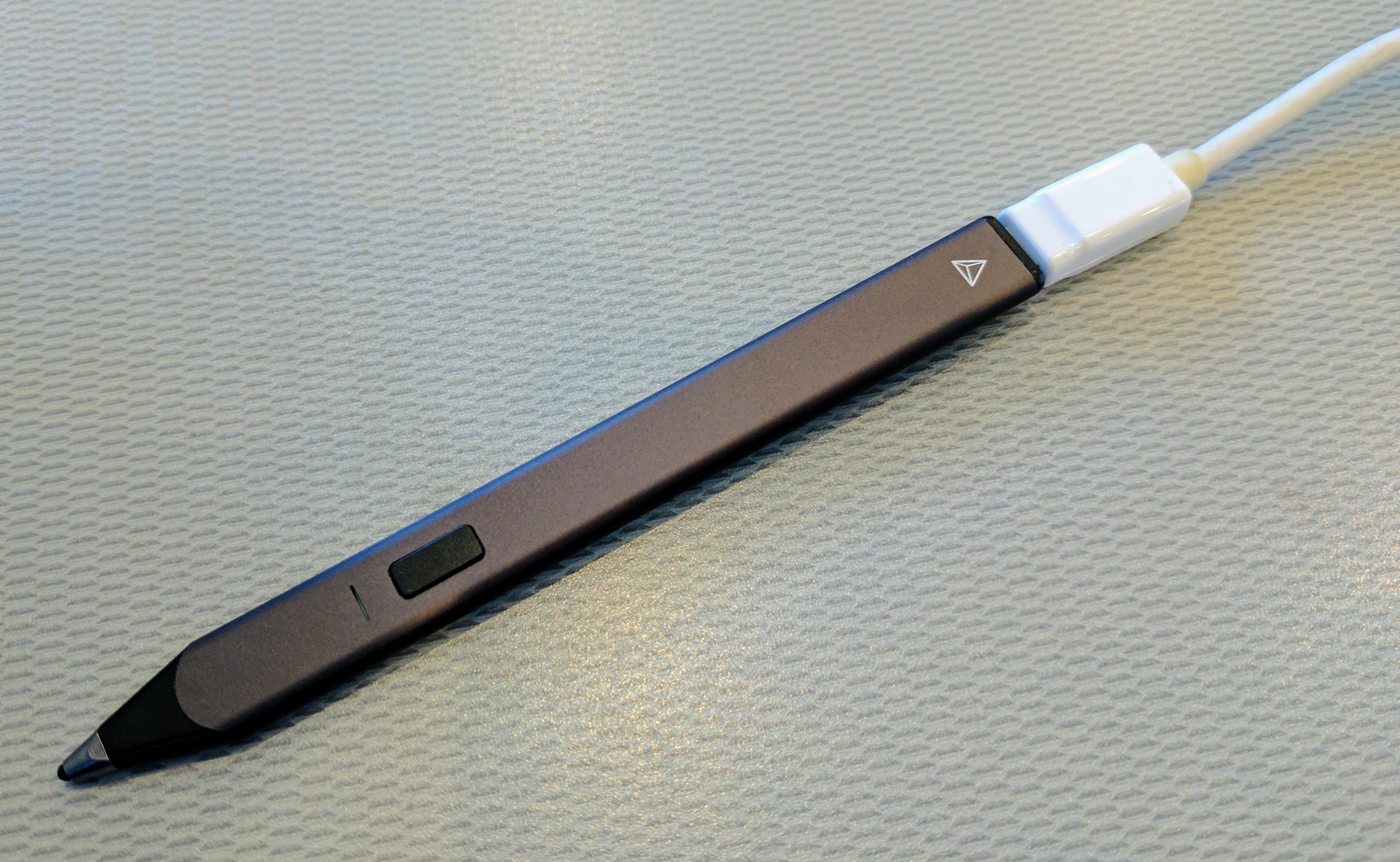 The Bluetooth pairing is simple. Press and hold the button until the LED starts blinking and then go into your phone’s Bluetooth settings to pair the device. It pairs easily to one device. Once I paired it to my iPhone, I could not easily pair it with a second device, like my iPad or another phone. That’s just one weakness of Bluetooth connection system on the Adonit Snap. 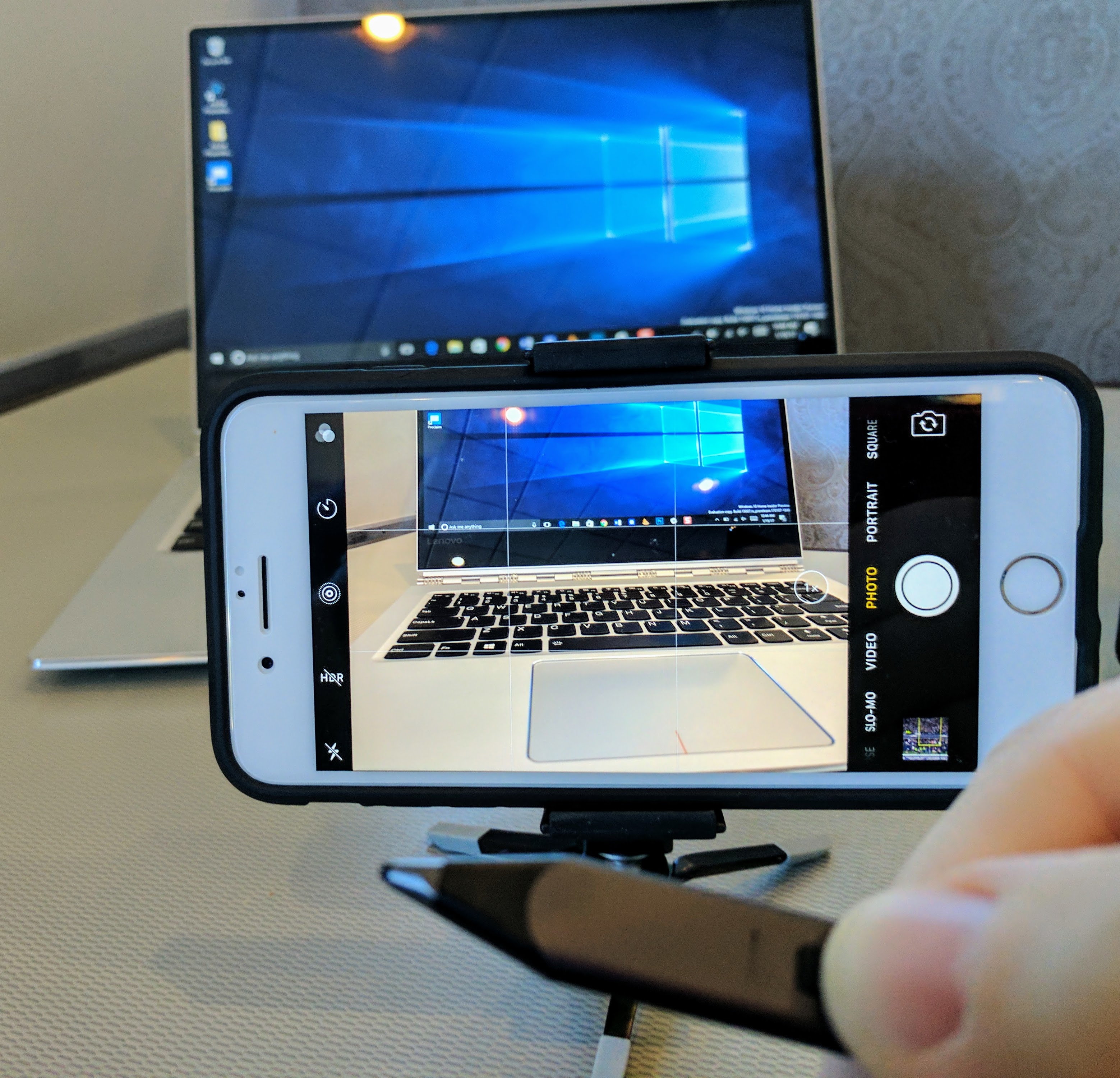 The name Snap comes from the function that lets users take photos with the stylus while paired with the phone. Open your phone’s camera app with the stylus connected to the phone via Bluetooth. Frame the photo and then press the button on the Adonit Snap. The camera shutter fires and takes a photo.

The Adonit Snap isn’t pressure sensitive, like some of their other devices. That means all lines and marks will measure the same thickness no matter how hard the user presses down. It also doesn’t contain palm rejection. So, this stylus doesn’t work well for art and design, but it’s a great tool for taking notes or simple sketches. 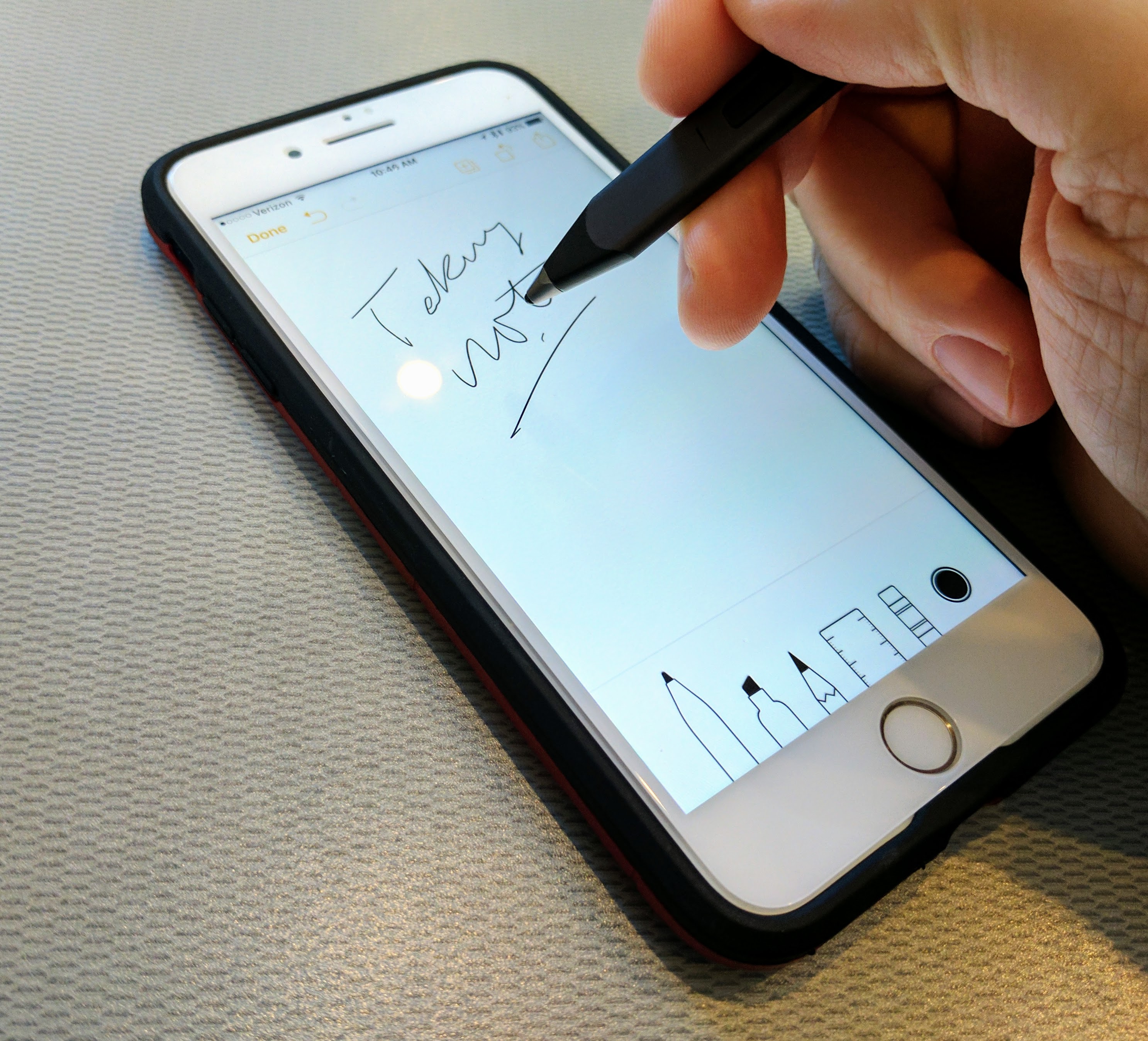 At only $35, it’s better than most cheap styli. Inking flows smoothly and quickly. Bluetooth styli will get out of sync where the tip touches the screen, but the digital ink shows up a tiny distance away from the physical tip’s point. Some users reported having this problem, but I never saw it.

The ink flow never stutters while writing quickly in my favorite note apps for iOS and Android. I use it sometimes to touch up photos, but mostly I use it for note taking.

The battery lasts days and maybe would last longer. I think it kept turning on in my pocket when I accidentally touched the button taking my phone out of my pocket or when it hit keys.

The micro-USB cable connection feels flimsy and the cable wobbles when I connect it.

I got one lemon that would not snap the photo on my iPhone. It worked with an Android phone, but did nothing when I tried to take photos with the iPhone camera. I got a replacement, however, that works fine.

Adonit offers stylus users a great deal at only $35 for a fine-tip stylus and remote camera shutter release. I like it and use it a lot. It’s one of the best styli available at this price and it’s compatible with Android and iOS.