Nowherelse.fr posted some new pictures of what it claims are parts that make up the new dock port that Apple is apparently going to be putting on the new iPhone. The new connector in these photos appears to be 8-pin in nature, something that aligns with earlier rumors that pegged the iPhone 5 as having an 8-pin dock connector and not the 19-pin dock connector as was previously rumored.

The site has put the alleged dock connector component next to a USB ending which gives us a good look at its smaller size.

Read: Apple May Update All iPhones, iPads and iPods to Smaller Dock this Fall. 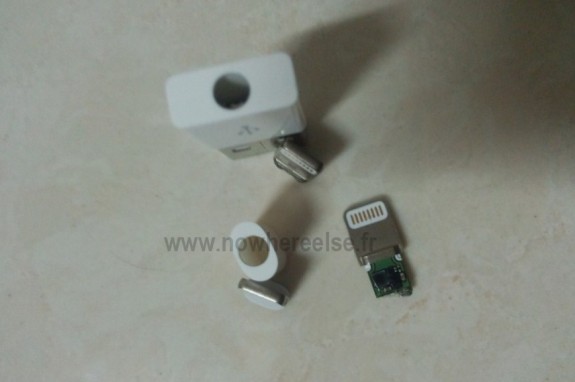 This could be the new iPhone 5 dock port.

This leak also comes shortly after a piece of iOS 6 code seemed to hint at the possibility of the iPhone 5 having a 9-pin dock connector.

What’s apparent is that Apple will likely be replacing the old 30-pin dock connector with a new smaller one, it’s just not quite clear what the size of the new dock connector might be. 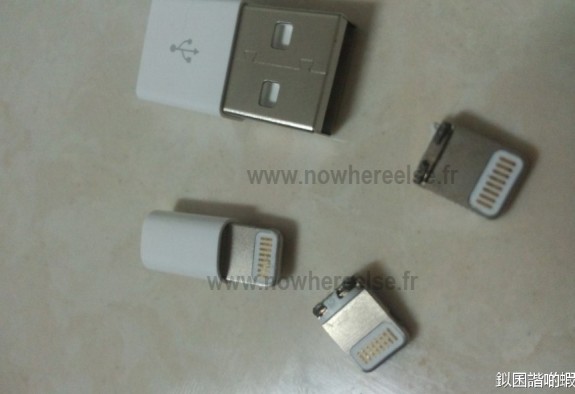 In addition, shifting to a smaller dock connector would allow Apple to keep the iPhone thin while adding a bigger battery to handle the rumored 4G LTE data speeds that are rumored to be on board.

The current rumor has Apple only slightly adding to the battery size of the iPhone with a new leak suggesting that Apple will only include a 1440 mAh with the iPhone 5.

Should that be true, it would mean that the iPhone 5 battery would only be 10 mAh bigger than the current 1430 mAh battery found in the iPhone 4S.

As for the rest of the iPhone 5, it’s rumored to have a taller design, a 4-inch display, an upgraded processor, a new HD FaceTime camera, and a thinner design.

Check out our iPhone 5 page to catch up on the latest iPhone 5 news.