The Samsung Galaxy S4 has appeared in benchmarks that show off a number of possible features including a 1.8GHz Exynos 5410 processor, a 4.99-inch 1080p display, 2GB or RAM, Android 4.2 Jelly Bean and more.

So far, we have seen several leaks in regards to the Samsung Galaxy S4 and many of those have come from purported benchmarks. Over the weekend, we showed benchmarks from a version of the Galaxy S4 headed to China Telecom and it appears that those benchmarks included more than was originally thought. 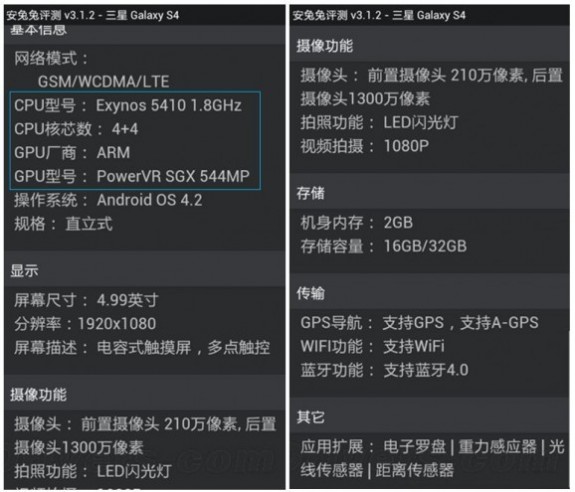 This new information comes from an Antutu benchmark that seems to reveal even more specifications about the device that is said to be coming at a launch date on March 14th in New York City.

The information, spotted by Samsung HDBlog in the Antutu benchmark for the device, shows a device, that is supposedly the Samsung Galaxy S4, rocking a number of familiar specifications. The listing reveals a number of different features including a 4.99-inch display with full HD 1080p resolution, a Exynos 5410 processor clocked at 1.8GHz – a processor that is thought to be the Exynos 5 Octa, and 2GB of RAM.

All of those have been rumored in the past. Also included are a 13MP camera, PowerVR SGX 544MP GPU, and Android 4.2 Jelly Bean. Both the camera and Android Jelly Bean have shown up in previous leaks as well. 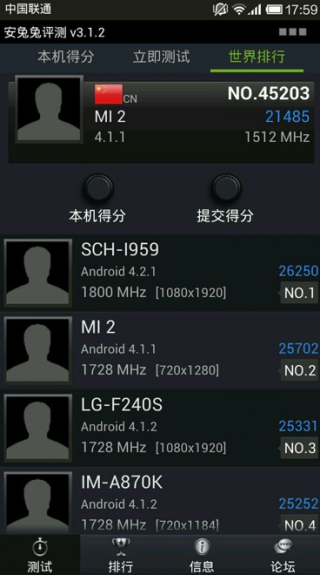 This comes from the same benchmark.

Oddly though, we only see two storage variants, a 16GB and a 32GB storage option. The Galaxy S4 has been rumored to have three storage options including a 64GB model, though, it could potentially arrive after the 16GB and 32GB.

Benchmarks are easily faked but these are indeed features that have all shown up in rumors before so it’s possible that Samsung’s Galaxy S4 may have all of these, and more, on board when it arrives later this month.

The company has not confirmed exactly what it will be launching on March 14th, but it’s clear that it will more than likely be the Samsung Galaxy S4, a device that will replace the Galaxy S3 as the company’s flagship, and join the Samsung Galaxy Note 2 on shelves as potential options for customers in the market for a new smartphone.