Amazon is blowing out Sprint 4G models this month. You can grab one of seven hot Sprint phones until April 30th for 1 cent. Of course, like most of these cool deals, you have to be a new subscriber and sign a contract, which I believe includes a commitment to a $79.99 unlimited data plan. The promotion ends April 30th or when stock is gone. All seven models were in stock at the time of this post.

So, if you are off contract with another carrier and considering moving to Sprint, you have you choice between 5 different Android models, some with color choices and all capable of running at 4G speeds on Sprint’s network. 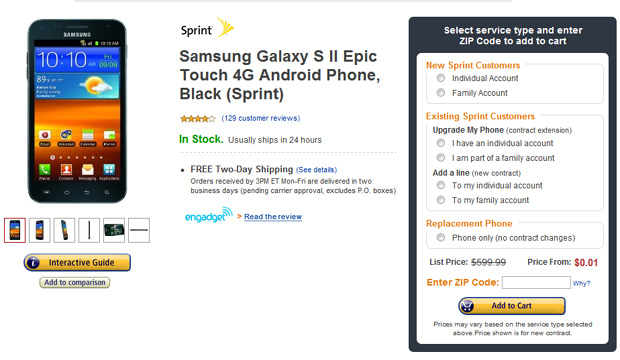 Here are the models you can choose from according to Amazon.

Which one would you snag or would you wait for the Galaxy Nexus? I think I would rather pay $199 for the Galaxy Nexus personally, but if money wasn’t right and I needed to grab one of these, I would definitely pick up the Samsung Galaxy S II Epic Touch in white. I had the AT&T Galaxy S II Skyrocket and loved it but changed carriers so had to let it go. The HTC EVO Design would be my next choice.