Today Amazon announced that its MP3 store is now optimized for the iPhone, giving iOS users an alternative to Apple’s iTunes Music Store.

The new Amazon MP3 store is a HTML5 website that lets users browse the online retailer’s large selection of digital music from any browser on the iPhone. The mobile website can do everything the desktop website does, including preview songs. 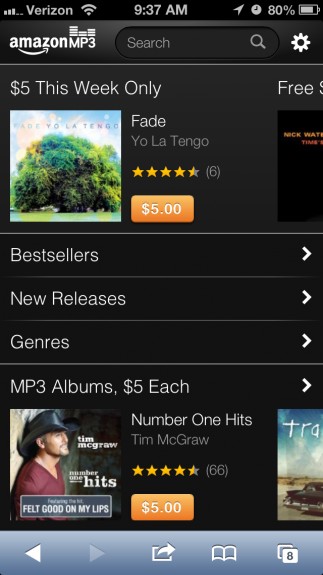 The Amazon MP3 store has a similar selection to Apple’s iTunes Music Store, but it routinely offers better deals for popular songs and albums. Amazon MP3 pricing starts at $0.69, and every day it offers one album for $5. Amazon also puts a large selection of MP3 albums on sale every month for $5 each.

Amazon’s new iPhone MP3 store is great for iPhone users who want another option for buying music, but for users who routinely buy a lot of music, streaming services like Spotify and Rdio are still a better value.

For $10 a month both Spotify and Rdio offer unlimited ad-free access to every song in their library to mobile users. That’s about the price of one album a month (or about two discounted albums from Amazon). The services also let users download songs to their devices for offline playback.