Digitimes is reporting that Amazon has ordered color e-ink panels from E Ink Holdings. The 6-inch color e-ink panels could potentially make it into the next generation Kindle Touch e-readers, which would be the first e-ink readers from Amazon to feature a color display. Though Amazon has the Kindle Fire tablet, based on Google’s Android operating system, that tablet utilizes a color LCD screen rather than e-ink technology. According to Digitimes, “Shipments of the touched-enabled e-book reader modules are expected to top three million units a month.” 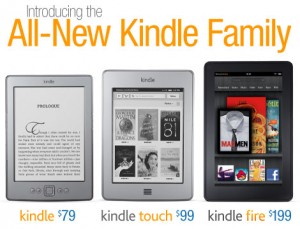 Int he past, Amazon has stated that it was researching color e-ink displays, but was not ready to mass produce them. Color e-ink displays in the past were either expensive or did not offer a good enough user experience as colors appear washed out and not as saturated or rich as LCD displays. Since color e-ink was announced, competing low-energy, high sunlight readable panels have emerged featuring color, a high refresh rate for videos, and power efficiency. Some examples of those competing technologies include Qualcomm’s Mirasol display as well as Pixel Qi. However, neither of those products nor color e-ink has found much mass market penetration yet. In the interim, Samsung has been heavily investing itself in AMOLED-based displays, such as the Super AMOLED and Super AMOLED Plus displays.

Separately, Digitimes is also reporting that Amazon is working on a ten-inch version of its Amazon Kindle Fire Android tablet. That tablet will have a color LCD screen.