Amazon’s first foray into mobile gaming, Air Patriots, is now available on iPhone, Android, and the Kindle Fire according to GeekWire.

Air Patriots is a free-to-play tower defense game with a military aviation theme. The game is like a mix of Flight Control and Fieldrunners, it gives players control of a squad of planes they then use to destroy enemy vehicles as they traverse the map. Instead of building stationary towers to fight off the waves of enemies players must trace the path of their planes over the path of the enemies.

Players can choose their possible squads at the beginning of each level and build them as the levels progress and they destroy more enemies for gold. Playing through each level on different difficulties will unlock challenges for those levels which pit the players against 100 waves of enemies in a survival mode.

On the Kindle Fire Air Patriots uses Amazon’s new GameCircle service to track achievements and scores. GameCircle will also sync the game between multiple Kindle Fire devices so users with more than one Kindle Fire won’t have to worry about which device they use to play the game on. It also means that users who upgrade to a newer Kindle Fire in the future won’t lose their progress in the game.

While Air Patriots is free the game does have a number of in-app purchases which range from $1 to $20. The game feature seven different maps, but only three of them are free. Players will need to pay for the other four maps. Each map costs $0.99 apiece, or players can buy every map for $2.99. 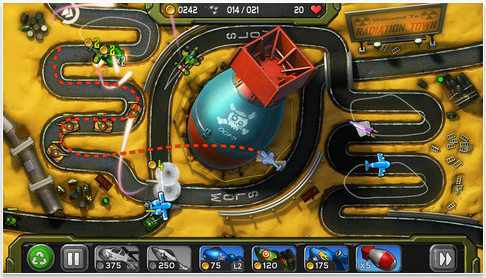 The previous game from Amazon Game Studios was a Facebook game called Living Classics which came out in August. This is likely only the first of a few mobile games from Amazon as it continues to grow the app ecosystem of the Kindle Fire and Kindle Fire HD.