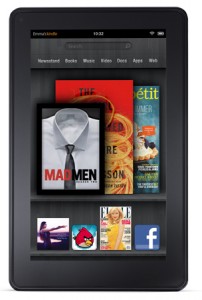 Well now. Gadget owners love when it comes time for an update to be released. Usually there is some prep for it coming down the pipes to refresh (and hopefully make better) your device. Seldom have we seen an update sneak in the back door the way Amazon pushed v 6.2 to the Kindle Fire. There was no warning, there was no real info released. But if you device had or has WiFi on, the battery is running above 40% or so, the update will happen whether you like it or not.

That’s right. There’s no way to refuse the update. I find this troubling to a degree which I will explain later. But first for all of those who have rooted their Kindle Fires you should know that this breaks the root. You can re-root though. Some rooters are saying that this breaks the Android Market, some say that it still works. Most are saying that Apps they loaded after rooting still work. I have not rooted my Kindle Fire so I can’t report specifically on this.

As for what the update fixes, well Amazon has one upped Apple by simply and cryptically saying that it offers “improvements.” I’ve seen reports that it improves the touch responsiveness and in my limited testing I’m noticing no fundamental differences there. You can also force the update if it doesn’t happen when you want it to by hitting this link.

Here’s the rub with the automatic and sneaky push. It’s great to have updated software. But I like to have control over when I do the update. If I’m in the middle of a project, busy time, or traveling, I frequently hold off updating whatever device might be eligible until I’m sure I can have some control over things. It’s not that I use the Kindle Fire for much other than entertainment purposes but I’d hate to see this kind of thing happen without an option to refuse or delay the update.

After having the update pushed to my Kindle Fire, there was some weirdness. I couldn’t access Amazon’s video section on the Fire and I had several crashes in various sections until after I had rebooted the device, once the update had been applied and already rebooted. I think I’d recommend doing a full reboot once the update has completed.