Over the last couple of months, Samsung has produced a number of advertisements that have taken shots at Apple, its fans and its products. And now, it appears that Amazon has joined the fray with a new Kindle ad that takes shots at Apple’s iPad while touting the benefits of the company’s Kindle e-reader and its sub-$200 Android tablet, the Kindle Fire.

The commercial starts off with an iPad owner walking up to a woman lounging on a chair somewhere nicer then where you’re sitting right now. You might miss it the first time around but if you look closely, he’s having a hard time dealing with the glare from the sun which has hampered his ability to see the contents, presumably a book, on his iPad.

He then stops and asks if the device that the woman is holding is the new Kindle.

Of course it is.

Even though he’s an iPad user, the man knows his tech and exclaims that the device is a mere $79. The woman, obviously amused, says that the Kindle is the best way to read, even in sunlight.

He then gets snarky, just like an iPad owner in a commercial for a competitor would.

The man exclaims that the Kindle doesn’t allow owners to surf the web or watch movies at which point the woman points to her children who are using the Kindle Fire which allows for both web surfing and movie watching. 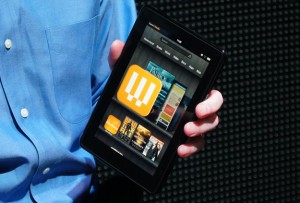 At this point the man suddenly suffers from apparent amnesia as he says that buying three Kindles must have been expensive. Wasn’t this the dude that just came right out with the $79 remark not 10 seconds before this?

Anyway, the woman rather excitedly shoots him down and says that all three devices are less than a single iPad. Totaling it all up, the $79 Kindle and two $199 Amazon Fire’s come to $477.

The cheapest iPad 2 that Apple sells is $499. Unless you decide to buy it refurbished.

Shortly thereafter, the man asks if anyone is sitting next to her as he is clearly intrigued by this lady’s prowess.

He is then immediately shot down, sent off to enjoy his expensive iPad 2 in the glaring sunlight.

Overall, I thought this ad was better than any of the Samsung advertisements. It points out the low price points. It talks about the features. It’s snarky. And it doesn’t insult Apple fans.

In other words, it’s classy.

You can also read our extensive review of the iPad 2, which will soon be replaced by the iPad 3.