Rumors of new Kindle Fire tablet models from Amazon are surfacing yet again, and the Internet giant is speculated to launch several models this year as an update to the current debut 7-inch slate that launched late last year. Curiously, though Amazon has been rumored multiple times in the past to launch a 10-inch Android tablet, it is said that the company won’t be debuting the larger slate this year.

With the Kindle Fire refresh, Amazon will be debuting two seven-inch tablet versions at differing price points and will be adding a high-end 8.9-inch tablet. According to The Next Web, Amazon will be debuting a low-end Kindle Fire with the same 7-inch 1024 X 600 resolution that comes with today’s Kindle Fire slate, a mid-range 7-inch model with a higher resolution 1280 X 800 resolution display, and a high resolution 1080p 8.9-inch model with a resolution of 1920 X 1200. The increase in resolution–as we’ve seen recently on the new iPad refresh, will be beneficial to reading, viewing pictures, watching videos, and consuming content on the web. 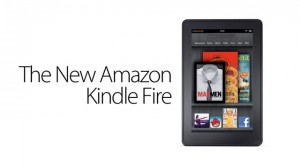 The Kindle Fire that debuted late last year achieved great success for having the right amount of compromises while still delivering a technologically advanced hardware platform. It featured a relatively high resolution 1024 X 600 display for its time, dual-core processing power, and a very heavily customized version of the Android OS.

Unlike other Android tablets that must tap into Google’s digital content platform for apps, music, books, magazines, movies, and other downloads, Amazon has its own content store and ecosystem. This is beneficial in allowing Amazon to undercut competitors with a $200 pricing for the Kindle Fire, which the company is selling at a loss in hopes that consumers will purchase other content from Amazon to help it recoup losses.

Google is also rumored to be entering the tablet space with a 7-inch quad-core Tegra 3 model from Asus. The debut of a Google branded Nexus Tablet will help Google combat Amazon in the Android space and focus attention back to the Android experience, rather than the Amazon overlay which hides most traces of the underlying OS.