Given that HTC had confirmed that the Android 2.3 Gingerbread update for the HTC Thunderbolt, the first 4G LTE Android smartphone to launch on Verizon Wireless, will be coming in Q3 after having missed its Q2 deadline, it stands to reason that the OTA software update is coming soon. Now, it appears that a Verizon Wireless-made brochure aimed at indirect dealers are now listing the 4G smartphone with Android 2.3 Gingerbread alongside the custom HTC Sense user interface. 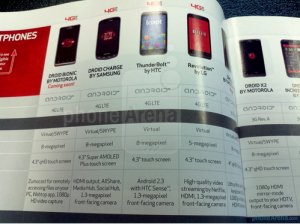 The brochure didn’t specify when the Thunderbolt would be available with Gingerbread pre-loaded nor did it hint at a time table for a software update to be pushed out, but given Verizon’s marketing material to dealers, it seems that the update is almost ready.

There were speculations that HTC had delayed work on the Gingerbread update to resolve some early bugs with the Thunderbolt. Users were reporting that there were issues with tethering, switching between and maintaining a 3G/4G connection, battery life, and some dropped calls. In the interim, HTC had focused its attention to issuing a software update for the currently available Android 2.2 Froyo operating system that was pre-loaded on the device, and delayed work with readying Gingerbread, according to speculations.