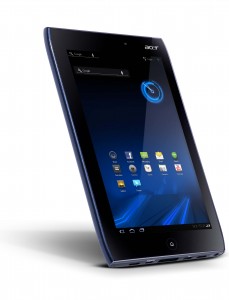 Acer has now given more information about the launch of the delayed 7-inch Iconia Tab A100 Android tablet. The company’s German division told fans on Facebook that the device will be launching in Europe in September, which is a more specific time frame than the second half of 2011 that was promised before.

In the past, Acer had stated that the Iconia Tab A100 won’t be released in the U.S. until the third quarter of this year.

While a more specific launch windows is obtained, some are speculating that the cause of the Iconia Tab A100’s delay is due to Android 3.2’s late launch. When Acer had initially announced the Iconia Tab A100 with Android 3.0 Honeycomb, there were speculations that the tablet could possibly be delayed because Android 3.0 required the larger 1280 X 800 resolution found on larger 10-inch slates. With 7-inch slates sporting a reduced resolution, select Honeycomb apps did not scale properly, causing hardware manufacturers to delay the launch of their tablets to wait on Google.

Perhaps this was also a reason why the 7-inch HTC Flyer launched with Gingerbread and HTC Sense rather than with Honeycomb, despite the tablet’s release when Honeycomb’s been out of the gate for a few months already.