It’s no secret that Android tablets are lacking in the optimized application department with current numbers for optimized Honeycomb applications hovering around 250-300 in number. And it doesn’t help that the rest of the applications, the ones designed for phones, often look and behave terrible. Well, to combat that, Google has announced that it will optimize those phone apps better using something called ‘zoom’ mode, a feature that will likely be coming in Android 3.2. 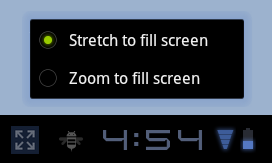 Right now, phone apps on Honeycomb tablets run in ‘stretch’ mode but owners will, after the update to Android 3.2 (Google says ‘upcoming’ update but it will be Android 3.2), will be able to switch between stretch and zoom modes.

Zoom mode is going to emulate a  normal/mdpi screen and then scale up to the point that it fills the screen.

In cases where an app does not properly resize for larger screens, this screen compatibility mode can improve the app’s usability by emulating the app’s phone-style look, but zoomed in to fill the screen on a tablet.

If you’re wondering how that looks, here is a before and after image, the zoom feature shown on the right:

Not bad, but quite frankly, this should have been available from the get-go and still does not remedy the fact that there are a minimal amount of tablet optimized applications on the Android Market right now.

Android 3.2’s roll out to the Motorola Xoom is imminent so this feature should be available to owners of that tablet very soon.