Earlier this month, owners of the of the HTC Flyer here in the U.S. were finally treated to Android 3.2 Honeycomb. Well, it looks like HTC isn’t done as the company’s customer service (not the most reliable of sources) has confirmed that the Flyer will getting another update in the form of Android 4.0 Ice Cream Sandwich at some point during the first quarter of this year.

Now, even though this is coming from customer service, take it with a grain of salt. First of all, customer service reps have, in the past, been terribly wrong about things of this nature. And secondly, release windows, especially for Android updates, can change in the blink of an eye.

We should also point out that HTC promised Honeycomb shortly after the launch of the Flyer only to release it months later.

That being said, if this timeline is to be believed, HTC Flyer owners will be seeing Android 4.0 roll out within the next 9 weeks. Exciting stuff to be sure but, in case you couldn’t tell already, we’re not holding our breath. 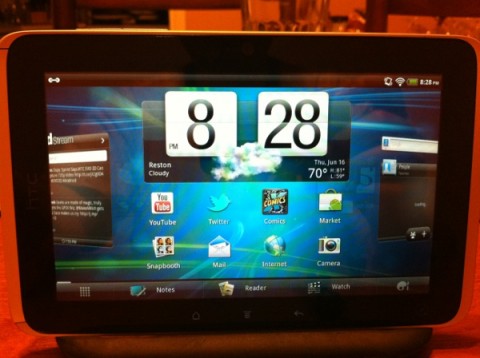 An update to Android 4.0 would certainly make the HTC Flyer an attractive option for those looking for Android tablet with a stylus. It might be hard to find though as Best Buy no longer carries it and it seems to have disappeared at other retailers as well.

Remember, this is a tablet that we reviewed during the summer of last year.

Still, you might be able to find a deal if you look hard enough and it might be worth doing just that now that Android 4.0 is apparently on the horizon.