After being announced at Mobile World Congress late last month, the Android 4.0 Ice Cream Sandwich update is starting to become available on AT&T’s network for owners of the HTC Vivid. At this time, early users who are reporting the availability of the software upgrade are noting that the carrier is not yet pushing out the Android 4.0, but that they have been able to download and install Ice Cream Sandwich by manually checking AT&T’s servers for the upgrade. Given that the upgrade is already available and ready on AT&T’s servers, it may be a short while before AT&T and HTC begin to push out the upgrade more widely to all users.

Right now, users will have to dial a string of numbers to ping AT&T’s servers to see if the upgrade is available for them, and users are reporting limited success with this method with some being able to successfully upgrade their devices. Users must dial *#*#682#*#* from their phone’s dial pad and hit send. Unfortunately, traditional methods for ‘pulling’ the update through checking for the latest software under the settings menu does not yet work. 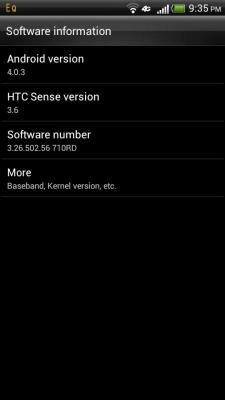 The update also brings Sense 3.6 to the phone at this time.

According to Android Central, AT&T told them that there is not yet an official update being pushed out to users at this time.

It’s unclear if the update that’s being installed by users as a result of dialing the string of numbers is the final official build that will be pushed out in the future, or if this is still a pre-release version.