Since the roll out of Android 4.2 Jelly Bean, patient Nexus owners have been looking for a bug fix update from Google to take care of the issues that the latest version of Jelly Bean brought with it. Android 4.2.2 will more than likely be the update that tackles some of these issues and it appears that the software update may have just made another unofficial appearance today in the buildup to its eventual release. 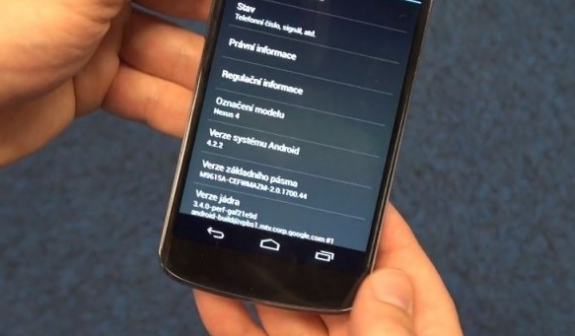 Android 4.2.2 has appeared, potentially, with bug fixes in tow.

In the meantime, Nexus owners experiencing issues have been waiting for a bug fix and it could be that Android 4.2.2 Jelly Bean will be the remedy. The update, which has not yet been announced or officially released by Google, seems to have emerged in recent days.

First, the software evidently started appearing on Nexus 4 devices in Malaysia and Brazil. Google has not confirmed this to be the case so it’s unclear if this was planned, if it was a mistake on Google’s end, or a fake.

Adding to the credibility of the update’s arrival though is an appearance in a video from the Czech Republic, courtesy of Engadget, which seems to depict a Nexus 4 running Android 4.2.2. The device that is shown running this “Android 4.2.2” doesn’t appear to have anything new on board in terms of features. And while this might seem like a bad thing, for Nexus owners, it’s potentially a good thing.

Thus far, Android 4.2 Jelly Bean remains unavailable on non-Nexus devices, potentially due to these bugs. At this point, it’s looking more and more like this could be an authentic piece of firmware rather than an elaborate hoax, and we’ve reach out to Google for comment.