Earlier this month, Google started rolling out the long-awaited Android 4.2.2 update for its Nexus devices including for the Nexus 4, the Nexus 10, the Nexus 7 and the GSM Galaxy Nexus. In particular, due to several issues plaguing it, Nexus 7 owners had been looking forward to the software’s arrival. After spending quite a bit of time with the update, it’s time now to go in-depth with the Android 4.2.2 update for the Nexus 7.

Back in November, Google rolled out the Android 4.2 Jelly Bean update for owners of the Nexus 7 and the Galaxy Nexus. Both the Nexus 4 and the Nexus 10 came stock with the software on board. The software arrived with a number of handy features, many of which I started using on a regular basis. Quick Settings has been one of my favorite features in Android 4.2 and I’ve actually started using lock screen widgets quite a bit as well. 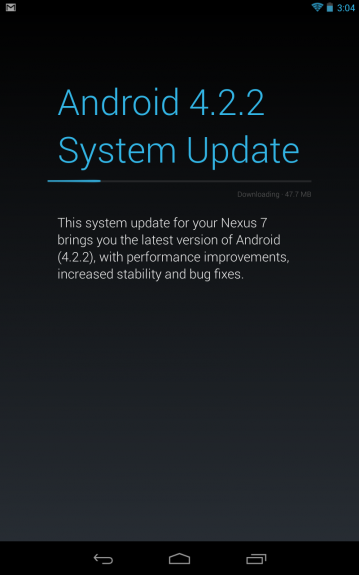 Android 4.2.2 Jelly Bean is the latest Android update from Google.

In addition to those features though, the Android 4.2 Jelly Bean seemingly brought some bugs along with it, including some devastating ones for Nexus 7 owners. Nexus 7 owners began complaining about stability issues, random reboots, Bluetooth problems, abnormal battery drain, slow charging and more. That said, many owners started to be on the lookout for Android 4.2.1, the first incremental update for Google’s new version of Android.

Android 4.2.1 arrived some weeks later but it didn’t address any of these issues. Instead, the update was solely focused on a bug wherein December was missing from the calendar in the Contacts application. A noble bug fix but it still left Nexus 7 owners who were experiencing issues, wanting a much heftier update in terms of fixes.

I was one of those people. While I did not encounter some of these bugs in the first few days with Android 4.2 Jelly Bean, I started to notice a few of them arise in the weeks after installing. Needless to say, I was also hoping that an Android 4.2.2 update would alleviate my issues.

That update started rolling out, finally, several days ago, and as I always do, I decided to wait for the Over-the-Air update rather than manually installing the software, even though that method was available.

It took several days, I didn’t see the software arrive until last weekend, but finally, Android 4.2.2 is up and running on my Nexus 7. That said, here are my thoughts on Jelly Bean’s latest update.

While the wait time for the Over-the-Air update may have been a little slow for my tastes, the Nexus 7 Android 4.2.2 installation process went off without a hitch which was a bit of a consolation prize. Often times with updates, Android or otherwise, there can be some issues. I’ve never experienced any with my Nexus 7, and Android 4.2.2 was no different.

The 47MB download doesn’t take long to pull from Google and the installation process was much faster than the Android 4.2 update which took a bit of time to get on board my tablet.

Once the device restarts on its own, Android 4.2.2 will be on board, and for those that have had Android 4.2 installed, the user interface will look no different than it did before.

However, that doesn’t mean that there aren’t some subtle changes on board Android 4.2.2. In fact, there are a few new useful features that I’ve come to start appreciating over the past few days. Neither of these are big additions but like Android 4.2, just because they are small, doesn’t mean that you won’t grow to love them.

With Android 4.2.2, Google delivered a feature called Quick Settings, a menu that can be pulled out of the Notification Bar at the top of the screen. It has become one of my go-to Nexus 7 features as I use it to quickly switch Wi-Fi networks (I own the Wi-Fi only model) and get in an out of Airplane Mode in a jiffy when I am flying. 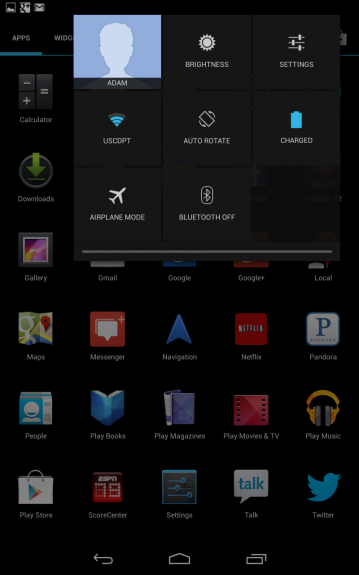 Now, users can long press to turn Bluetooth or Wi-Fi on or off.

Google has simplified these settings even further in Android 4.2.2. In Android 4.2.2, users can now use a long press to switch Bluetooth on and off or Wi-Fi on or off. This, while not groundbreaking, will definitely help to make life a little simpler.

I do wish that Google changed all of the toggles to a long press but that may not come until it rolls out another update. If it even comes at all. As is though, it’s still a nice addition.

Another added feature is a download notification in the Notification Bar that shows off the completion percentage of a download and an estimate at how long it might take to arrive. 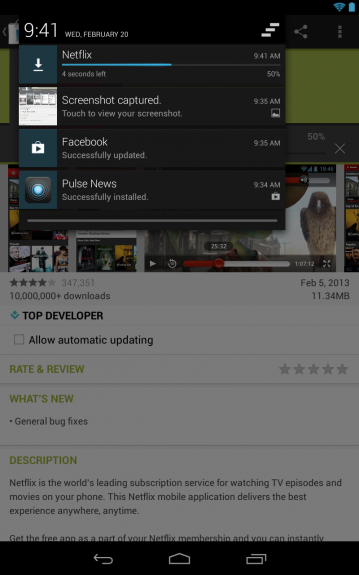 Again, nothing earth shattering here, but it’s nice to know how long some of my bigger downloads might take and it’s a feature that I’ve come to rely on after using Android 4.2.2 extensively.

After Android 4.2, many Nexus 7 owners were complaining about a random reboot issue where in the device would, out of no where, randomly reboot without warning. Some owners were experiencing it multiple times a day.

My Nexus 7 never had a serious issue though I will say that it did randomly reboot once back in December. That, fortunately, was the only time that I experienced the problem.

Those that were experiencing the issue though are telling me that the issue has been resolved in Android 4.2.2. And despite the infrequency of my random reboots, I’ll say that I haven’t experienced one in Android 4.2.2 yet and I’m hoping it stays that way.

One issue that I did run into was the Bluetooth issue that many Nexus 7 owners were complaining about. Owners complained of choppy sound, bad sound, and terrible connections. I am not a huge Bluetooth user but I definitely experienced some of this when I used my Nexus 7 while paired with a Bluetooth device.

So far, so good with Android 4.2.2. I hooked up a headset with the Nexus 7 and everything seemed to be back to normal. The sound was crisp and clear, something that was not always the case in Android 4.2 Jelly Bean.

Another issue that I ran into with Android 4.2 Jelly Bean were slow charging times. It would take many, many hours for my Nexus 7 to charge all the way to 100%, something that was certainly not the case in Android 4.1.

I was hopeful that Android 4.2.2 would solve this issue as it made my Nexus 7 tablet virtually unusable. I simply lost patience with the time it took to charge it. 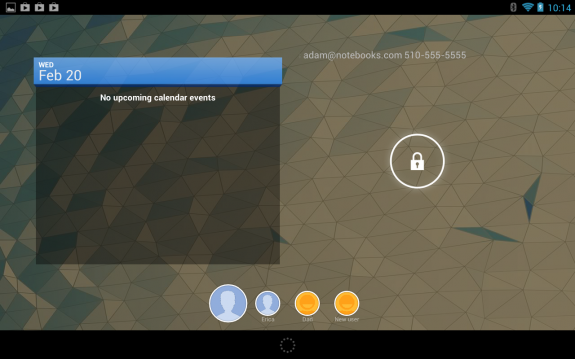 Charging times on the Nexus 7 appear to have been improved from Android 4.2.2

Fortunately, things seem to have improved. I didn’t have to wait for an eternity for the Nexus 7 to charge though I will say that it still seems a bit slower than it was in Android 4.1. That could be my imagination but it seemed to zip in Android 4.1 and while it’s faster in Android 4.2.2, it still doesn’t fly like I remember.

Nexus 7 owners had been complaining about battery drain issues in Android 4.2, issues that I never saw.

So while I can’t confirm that there is a fix for those in Android 4.2.2, I can confirmed that my Nexus 7 isn’t experiencing any abnormal battery drain with the new update and seems to be holding a charge quite well.

If you’ve been experiencing any issues with your Nexus 7, I recommend installing the update. Not only has there not been any major issues discovered in this bug fix update, but it has fixed several issues that were lingering since last year.

In particular, the Bluetooth issue has dissipated and it appears that the random reboots were handled as well. My Nexus 7 is also getting great battery life and the slow charging times that once affected it, seem to have gone away as well.

So because it seems to fix rather than break, I think it’s safe to install this update on the Nexus 7.

What’s Next for the Nexus 7?

With Google seemingly tackling many of the issues that had been haunting owners since the release of Android 4.2 Jelly Bean back in November, it could be that the next update for the Nexus 7 is Android 5.0 Key Lime Pie.

Google is rumored to be showcasing the software at Google I/O in May, and given that the Nexus 7 is less than a year old, we imagine that it will be one of the first to receive the software upgrade when it arrives.

Let’s just hope that it’s relatively bug free when it does get the update and its new features.