The Android 4.2.2 update is rolling out to Galaxy Nexus smartphones, Nexus 7 and Nexus 10 tablets.

Reddit users are reporting that the GSM Galaxy Nexus and several of the latest Nexus tablets are receiving over the air update notifications for Android 4.2.2.

The software update promises “performance and stability” fixes, and one user reports that it has improved his ability to use Bluetooth in his car, saying, “Tested out bluetooth streaming in my car. Much less hicups when streaming from Rdio or GMusic, but still not perfect. I got disconnected from my stereo when it switched from WiFi to 3G.”

Bluetooth A2DP problems are a common issue for Nexus owners on Android 4.2. This update could bring fixes to the Nexus 7 to correct the slow charging bug which has frustrated many users. 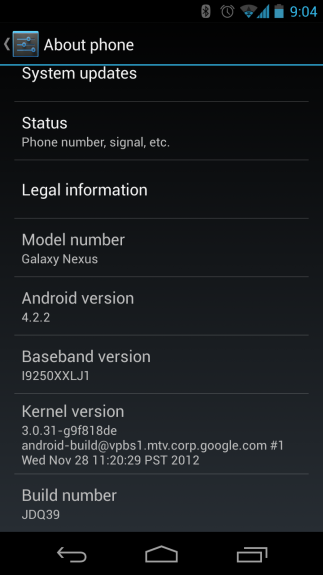 The Android 4.2.2 update starts to roll out.

Android 4.2.2 first appeared in a video on a Nexus 4, but so far our Nexus 4 devices have yet to receive the update. There are no reports of the Android 4.2.2 update on Nexus 4 devices, but Google typically rolls out updates in a staggered fashion so we expect it will land soon. For users who don’t see an update notification on their GSM Galaxy Nexus, Nexus 7 or Nexus 10, one will likely arrive over the next few days.

Android 4.2.2 should roll out to the rest of the current Nexus devices in the coming days and it is likely that Google will post files to the Factory Images page in the near future.