Google is rumored to be announcing Android 4.2 in the near future and while many of its features remain firmly in the shadows, one of its new features may have been outed on video today.

Android Police, which claims to have a system dump from the LG Nexus 4’s software, posted a video today detailing a feature that is currently being dubbed “Quick Settings.” The feature was discovered buried in the Android 4.2 build which is called “JellyBeanMR1” and while the software only shows a placeholder for the feature, a video shows the feature in action. Sort of.

In the video below, we see the owner of the device swipe down to open up the usual Notification menu. Then, he or she swipes again to reveal the placeholder image for the Quick Settings option. 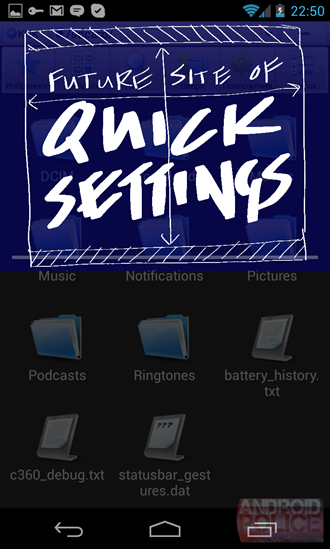 A double swipe might bring up a new Quick Settings option.

It’s unclear exactly what might be in this menu but Quick Settings might refer to things like Wi-Fi, screen brightness, and more, features that are typically accessed through the regular settings menu but would benefit from quicker access.

It also appears that the Notification menu doesn’t pull down the bottom any more but that seems a bit off and could just be a bug.

Read: New Nexus Phone: Everything We Think We Know.

So while this is promising for Android 4.2, it’s not confirmed for the software. There is definitely a chance that this feature may not even show up in the final version of the software given the fact that this is not final software and there is always a chance that Google might give it the boot.

The rest of Android 4.2 still remains a relative mystery. We have heard that it might be coming with Gmail 4.2 complete with pinch-to-zoom and a way to swipe to delete but other than, and the Quick Settings, the picture of Android 4.2 remains incomplete.

Fortunately, with a system dump out in the open, and Google apparently launching the Nexus 4 on October 29th, we could hear and see a lot more from Android 4.2 soon.