Android 4.3 showed up on a Nexus 4 in Thailand today complete with a new camera app that shows a slight redesign. A set of photos and an Android 4.3 video appeared online, offering the most concrete proof of an Android 4.3 update we’ve seen yet.

Android 4.3 is rumored as the next version of Android which will keep the Jelly Bean name and bring some new features ahead of the rumored Android 5.0 Key Lime Pie update which some believe will arrive later this year with a Nexus 5.

Xda-developers forum member chaleen posts three photos of a Nexus 4 running Android 4.3 and includes a video of Android 4.3 on the Nexus 4 that shows off the new camera app. The photos and video appear to originate on the Galaxy Nexus Facebook page, and come from a model available at the TG Fone Shop booth, a phone reseller, at the Thailand Mobile Expo. 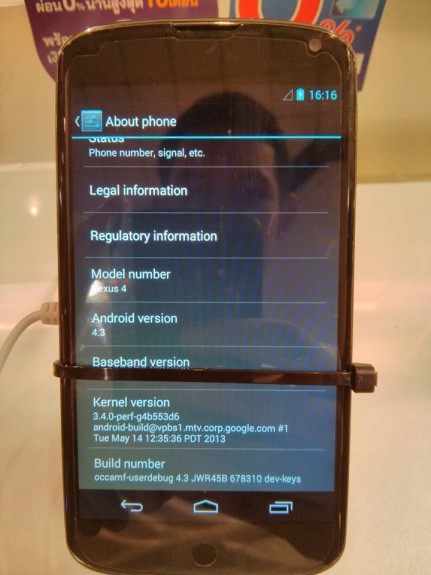 Android 4.3 running on a Nexus 4 in a new video that appears to show the latest version of Android.

The image above shows a Nexus 4 running Android 4.3 and includes signs that this could be a real version of Android 4.3 out in the wild. The kernel version shows a build date of May 14th, the day before Google I/O 2013, where we originally expected to see Android 4.3 announced.

The build number is JWR458, which is slightly higher than the previously reported Android 4.3 build numbers, but possible given testing updates.

While there are likely more Android 4.3 features to be found, the most noticeable one is a new Camera app that offers a slight redesign and a new look for the camera controls. The video below shows what is very likely Android 4.3 running on the Nexus 4.

We can’t discern much more about the Nexus 4 and Android 4.3 from this video and photos, but if this is a real version of Android 4.3 it appears that Google is much closer to a release.

The latest rumor points to an Android 4.3 release on June 10th, the same day Apple is scheduled to announce iOS 7. A rumor form earlier this week claims Google will launch Android 4.3 and the white Nexus 4 on that date, in just over two weeks.

Android 4.3 appeared in search results for the Google Developer site ahead of the Google I/O keynote, which gives hope that the release is scheduled for the very near future.