Google’s rumored Android 4.4.3 KitKat update has been spotted once again ahead of its highly anticipated release for the Nexus 4, Nexus 5, Nexus 7, Nexus 10, Samsung Galaxy S5, and others. 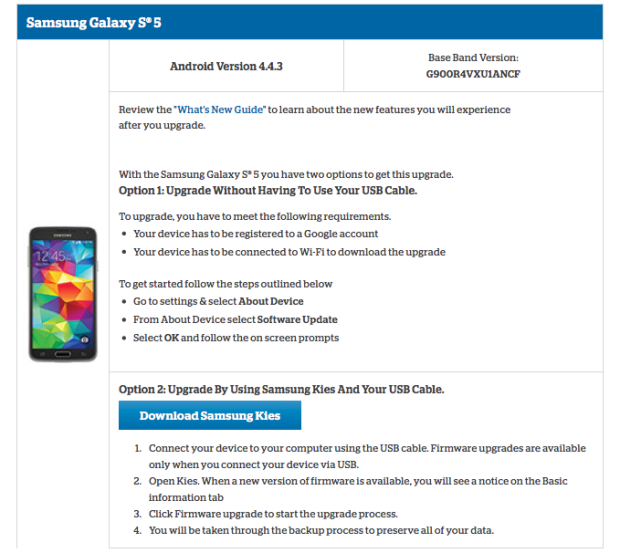 Mistake or not, the Android 4.4.3 KitKat update appears destined for the Galaxy S5.

The Android 4.4.3 reference has been up on the carrier’s website for at least a few days now. Google’s cache only goes back to May 25th so we can’t say when it first appeared.

It could be that this is just a simple mistake though given all of the rumors that have been floating around about the Samsung Galaxy S5 Android 4.4.3 KitKat update, we can’t help but wonder if it’s something more than that.

Rumors point to a Galaxy S5 Android 4.4.3 KitKat update release in the next few weeks so it’s also possible that U.S. Cellular simply got ahead of itself. It wouldn’t be the first time that this has happened with Android 4.4.3.

In April, Sprint announced plans to roll out the Nexus 5 Android 4.4.3 KitKat upgrade. The update, it said, would deploy from April 14th to April 21st. Shortly after making the announcement, after a grand total of zero Nexus 5 users got the update, Sprint confirmed that the update was delayed indefinitely due to problems.

Android 4.4.3 KitKat is expected to be a massive bug fix update aimed at alleviating many of the issues that arrived with Android 4.4.2 KitKat back in November. Owners of Google’s Nexus 7, Nexus 4, Nexus 5, and Nexus 10 have been extremely vocal about the problems plaguing Android 4.4.2 KitKat and rumors suggest that they will be getting the upgrade down the road.

The update is expected to tackle everything from VPN issues to camera problems though it’s also expected to contain unique enhancements for carrier-branded devices. For instance, Sprint’s delayed Nexus 5 Android 4.4.3 KitKat update should enable Sprint Spark band 26 and band 41 when it arrives.

Google’s update is all but confirmed at this point and with Google I/O fast approaching, it could be that we finally see a release in the near future. Google typically announces its updates shortly before the release which means that Android users probably won’t find out about the Android 4.4.3 KitKat update’s release date until the day that it arrives.