Yesterday Google announced its new Nexus 5 smartphone running Android 4.4 KitKat, the company’s latest mobile OS, and while most of the focus was on new features and design changes, one that didn’t get attention is the keyboard. Google’s stock keyboard recently launched on the Play Store, available to all, and the new version 2 is expected to arrive soon, but for now it’s only available on KitKat.

The stock Google Keyboard on Android devices allows for gesture typing, next word prediction, and much more, but the latest version just got even better. Along with fully supported Emoji’s now, we also have an improved gesture typing experience, and a few tricks from the popular third party keyboard SwiftKey. Thanks to AndroidPolice, the brand new Google Keyboard is available now, before Google’s even released it. 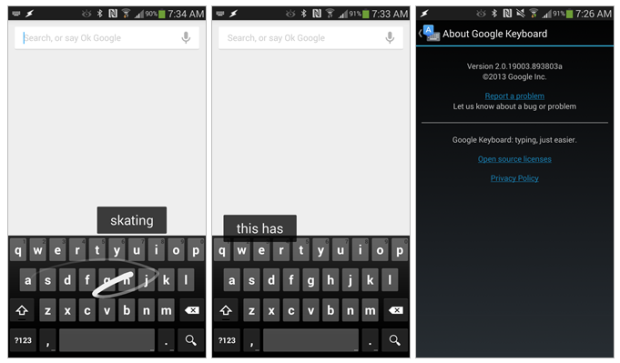 They managed to pull the new Google Keyboard 2 right from the KitKat built, and it has a few nifty features that we haven’t had before without using another option from the Play Store. The Emoji support may make many younger people happy, but for those hunt and peck typists the gesture typing experience got a major overhaul.

It’s called Space-aware gestures, which basically means you can slide (like Swype or SwiftKey Flow) your finger from key to key instead of tapping along, and the keyboard will know what you want and type it out. I love this method, and it works excellent for one-handed use. However, the new keyboard will allow you to slide from letter to letter, and word to word, without lifting your finger to apply the space. Which once users get familiar with, will allow for a superior and blazing fast typing experience.

As you’re sliding your finger on the display to spell a word, just slide down into the spacebar and go back to typing away, and Google does all the work from there. Type entire sentences without lifting your finger once, it works like a charm. I did have a few issues with accuracy, but a KitKat device and the Nexus 5 will probably have a much better experience, as that’s what it was designed for.

Read: How to Setup Galaxy Note 3 Keyboard For One-handed Use

If you’d like to download and install the new Google Keyboard version 2, you can get it from the Android Police link above. Simply installing this like any other application right onto your device, or over the original Google Keyboard and you’ll be typing away in seconds. It’s sad to see the Holo Cyan Blue color go away, but the new Holo Light looks great.