The Android 4.4 KitKat update is on the way to the Nexus 4, Nexus 7 and Nexus 10, as well as other non-Nexus devices, but not fast enough for many users. This week Google published a free Android 4.4 KitKat Quick Start Guide on Google Play that runs down the new features that Android 4.4 brings to these devices.

The Android 4.4 Quick Start Guide also shows Nexus 5 owners what is new on their new Nexus smartphone, including the Google Now screen that sits to the left of the main home screen.

No matter what Nexus you own or are waiting for, this Android 4.4 guide will help you figure out what new features are coming and how to use them. 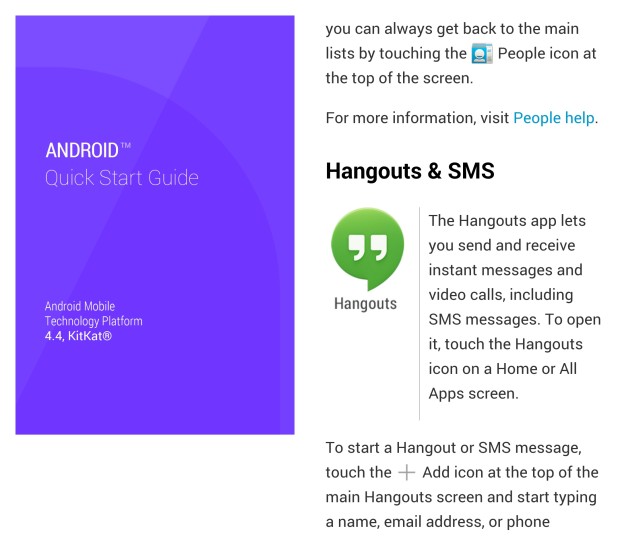 A good deal of this free 53 page Android 4.4 guide covers the new Nexus 5 specific Google Now feature which allows it to listen for “Ok Google Now” from any screen. The Nexus 4 and Nexus 7 will require a user to first open Google Now.

Another cool feature this guide highlights is the connectivity of Google to your incoming and outgoing calls. Android 4.4 on the Nexus 4 and Nexus 5 won’t be able to tell you what individual is calling you if they aren’t in your contacts, but it will use business information to identify calls.

Another nice tip this guide points out is that when things are going well with your connectivity WiFi bars show up in white, but if something is wrong, it will show up in orange.

If you’re looking forward to the Tap & Pay feature in Android 4.4 on the Nexus 4 and Nexus 5, this guide covers some information, including the option to use Google Wallet or another payment app from the Google Play Store.

Android 4.4 delivers better WiFi printing through Chrome and other apps, with a quick look at how to set this up and change settings. On top of printing, Android 4.4 integrates better file storage, and this guide will show users how to make use of it. 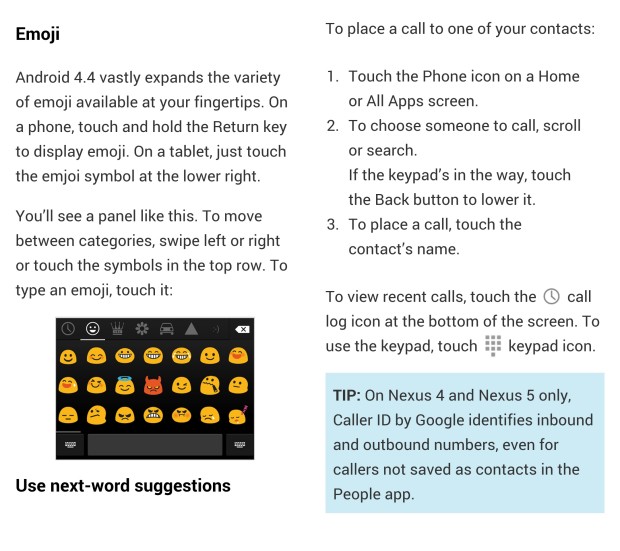 Android 4.4 also brings an Android Emoji keyboard built in to the stock Android keyboard, which will open up a new method of fun communication. The Android 4.4 guide shows users how to use this and other keyboard features.

Rounding out the Android 4.4 KitKat Quick Start Guide is a look at the new stock apps like the camera app, G+ Photos and others like the new Hangouts & SMS functionality which combines texts, chat and video calls.

This guide is aimed at Nexus owners who have a Nexus 4, Nexus 7 or are buying a Nexus 5, but also covers some items for Google Play Edition devices. This guide is also a good sneak peak at what users can expect from Android 4.4 KitKat on their Android smartphone.