It looks like Google may be borrowing a page from Motorola Mobility’s playbook ahead of the completed acquisition of the smartphone-maker. With Android 5.0 Jelly Bean, it is now speculated that Google will be bringing Lapdock-like capabilities with the next iteration of Android with scalable, full-screen apps.

In a prior report, there were speculations that Android 5.0 may bring dual-booting capabilities with Windows 8, but according to Mobile-Review blogger Eldar Murtazin that won’t be the case. Murtazin’s rebuttal makes sense as Google wants to compete with, not collaborate with, Microsoft, and there are already a number of third-party solutions to dual-boot or emulate Android on top of Windows. 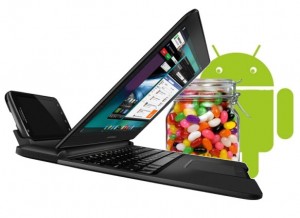 Unwired View‘s Staska posits that Google may be working on Webtop/Lapdock capabilities natively into Android 5.0, adopting a hardware ecosystem similar to Motorola’s proprietary platform. Apps will run just as they’re made on a user’s smartphone, but when you place a Jelly Bean smartphone into a compatible dock, similar to Motorola’s Lapdock solution, then the apps will blow up into a full-screen version similar to a netbook-like experience.

This makes sense as many third-party app developers allow users to purchase smartphone apps once and they can also download a tablet-optimized version of the app with higher resolution graphics and an improved user experience for larger screens for free. Android 5.0 could store both the smartphone app and the tablet-optimized app on the device and launch the tablet version when placed in the correct docking accessory. This would create a powerful mobile OS that can scale as needed on the go. This also matches what Google is attempting to do with the Chrome browser for Android, including full-screen browsing.

Right now, the thing that constrains Motorola’s Lapdock ecosystem is RAM as the Lapdock itself is a dumb accessory without any power. It’s just a keyboard, trackpad, large display, and extended battery. Procoessing power, memory, storage, and wireless access is handled through the phone itself, and Motorola’s Atrix and Droid phones definitely feel the slow down with just 1 GB of RAM.

We’re also beginning to see a lot more hybrid form factors on the market, such as the transforming Transformer from Asus or the Padfone.

It’s unclear if the solution may cannibalize  tablet sales; Google’s tablet manufacturers are already struggling to move Honeycomb tablets. The move can also take away from sales of Windows-based ultra books and notebooks.

Hopefully we’ll hear more about the project at Google I/O.