A new rumor surfaced claiming that Google is planning to delay Android 5.0 by two to four months, a move that means Android 5.0 Key Lime Pie will miss Google I/O in May.

Software delays are not impossible, and they are nothing new. Apple is reportedly also facing issues with iOS 7. But if Google plans to delay versions of Android and new features for the reasons claimed in this report users better be happy with Android 4.2.2 because Android 5.0 will never arrive.

Don’t believe the latest rumor that Android 5.0 is delayed.

A report from Gadgetronica claims internal sources point to an Android 5.0 delay that will miss Google I/O. This delay is not reportedly tied to issues with the software or new features that are not done. The publication says Google is delaying Android 5.0 to allow manufacturers to update devices to Android 4.2 first.

There’s a reason the Android figure in the image above is laughing while eating Key Lime Pie.

While it is true that more than 50% of active Android devices run Android 4.0 or lower and new devices like the HTC One don’t run the latest version of Android it is hardly a reason for Google to slow down plans for Android 5.0. 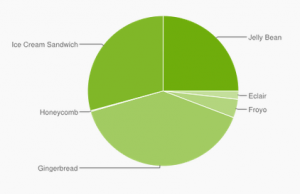 The Samsung Galaxy S3 is still on Android 4.1.2, but it could get Android 4.2 in the coming months. The bigger question is if this one year old phone will receive an Android 5.0 update in the U.S. where it uses a slower dual-core processor.

For other manufacturers, Google offers the Android PDK. This program includes a number fo tools to make it easier for manufacturers to roll out Android updates in a timely manner. Sony reportedly has access to the Android 5.0 PDK tools, according to a benchmark for a Sony Xperia device.

The Google I/O event is an event where Google announces new software features, new hardware and new versions of Android. This is the reasons developers pay nearly $1,000 to attend the event that sells out in minutes. Google is incredibly unlikely to delay Android 5.0 from a developer event just to let manufacturers get updated to Android 4.2 first.

With nothing more than a rumor based on sketchy reasoning, we still fully expect an Android 5.0 release at Google I/O.