If you’re an Android or iOS user who has had the itch to potentially make the move to Microsoft’s Windows Phone 7 software, you’re in luck. That’s because Microsoft has just released a web demo for Windows Phone 7 that can be accessed by Android and iOS users via the web. Yes my friends, it means that you’ll be able to check out what the folks in Redmond have to offer right from your favorite chair.

If you head to https://aka.ms/wpdemo using your browser on your iPad, iPhone or Android device, you’ll instantly be transported to the tiled world of Windows Phone.

It’s not only a great way to check out software that you may have never seen or used before but it’s also worth checking out if you’ve been thinking about getting a Windows Phone powered device like the HTC Titan or Samsung Focus S. 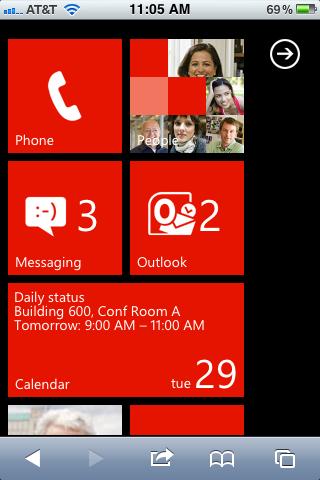 Windows Phone 7. As seen in Safari.

You’ll still want to go hands-on with the hardware before you buy though.

Kudos to Microsoft for doing this. It’s actually a neat little experience.