Google officially released Android 4.4 KitKat today, which is only available for the Nexus 5 currently, but will be coming to other Nexus devices soon. Obviously, there are a ton of improvements and new features with this latest version, but perhaps one of the less-known features making its first appearance in Android is emoji, which will come default with the Android keyboard in KitKat.

Until now, only third-party Android keyboards delivered emoji icons to Android, and most users thought you were an iPhone user anyway if you used emoji, even on Android, but now that it’s a native feature, both iOS and Android can share the love without any iOS assumptions going on.

Before today, texting back and forth between an iPhone and an Android device was pretty cumbersome when emoji were involved. iPhone users would type in an entertaining emoji icon, but Android’s default text messaging app wasn’t able to support it. Third-party apps, like Google Hangouts, allowed for seamless cross-platform emoji, but it wasn’t text messaging by any means. 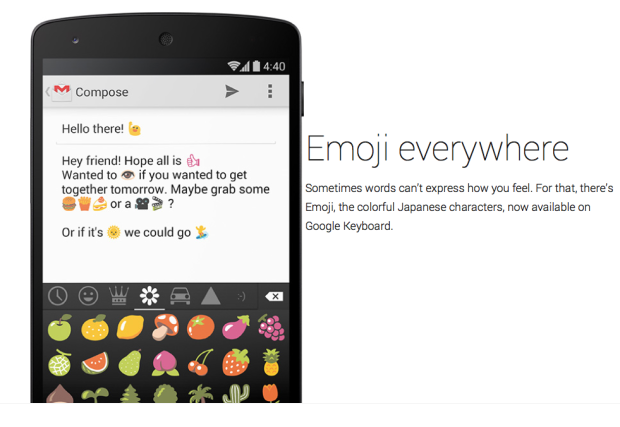 However, Android users will now get native emoji on their KitKat-equipped handsets. However, the update is only coming to a handful of devices right now. The Nexus 5 obviously comes with KitKat, but Google also announced that the Nexus 4, 7, 10, the Samsung Galaxy S4 and the HTC One Google Play editions will be getting the KitKat update “in the coming weeks.” Hopefully that list of devices will grow soon in the future, but for now, it seems only newer, Google-branded devices will be getting the update.

As for the Nexus 5, it looks to be the phone to dominate the smartphone market this year. Last year’s Nexus 4 didn’t come with LTE, which instantly threw up red flags and caused Google’s flagship device to be put at the wayside while other flagship handsets were put on the pedestal instead. Hopefully the Nexus 5 will change that, though.