This chart and link to this Business Insider and The Understatement articles by Michael DeGusta is circulating around the Interwebs today. It is certainly worth a look. (As is DeGusta’s post from either source.) 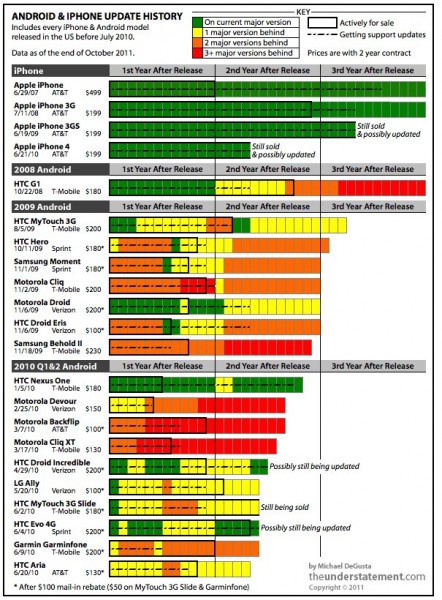 Fragmentation has been such a big issue with Android for so long that it has almost become a cliché. Except for users who are caught in the middle. DeGusta is correct. Customers do get screwed in all of this, but is that really a surprise anymore? Mobile providers have certainly proven that they are as good as dope peddlers at luring in customers and keeping them hooked, regardless of how they treat them.

Don’t get me wrong here, I think the Android fragmentation issue is a problem on many levels. I just don’t think we should be surprised by the corporate behavior and consumer willingness to play along that allows it to exist.

The chart obviously wants to compare Android to Apple here. There is some merit in that. But recently Apple has embarked on its own path that has some fragmentation issues dotting the landscape. The difference here is that Apple denies certain newer functionality to existing devices so it can sell the newer version. I don’t think that’s a secret. With Android there just doesn’t seem like there is a plan at all. You can get angry in either case, but it is at least easier to understand and focus the anger when there is a plan behind it.

DeGusta has some valid points. I’m sure most will agree with them and some won’t. Of course the ones who won’t even care are the ones running the game.