If you love to game on your Android device, perhaps playing Madden 2012 or just enjoying retro classics on your favorite emulator — you’ll be happy to know that the next version of Android will be bringing support for gamer controllers to the party.

Developers found this nugget of joy while looking through the Android 4.0 SDK. Android 4.0, better known as Ice Cream Sandwich is coming on the Samsung Galaxy Nexus in a short time.

This is the first time that the Android operating system has natively supported game controllers. While we have seen hacks that allow you to use the PS3 controller or WiiMote with Android phones that have been rooted, this new funding suggests that we will see full on support for game controllers on Android smartphones and tablets out of the box.

So far, we don’t know which controllers will be available, but there is speculation that this will include Bluetooth controllers and those which connect over USB. This could also leave open the  possibility of using an Xbox 360 or PlayStation 3 controller with your Android device. 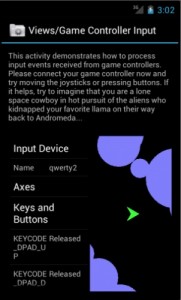 The coming of real controllers is a good thing for mobile gamers who aren’t a fan of playing on their touchscreen, like myself. I played many more games while reviewing the Sony Xperia Play, an Android smartphone with a dedicated PlayStation controller that slid out. I could see a bluetooth gaming controller that fits in your backpack being a big seller if it worked with all Android 4.0 devices.

This would give Android devices a leg up on the iPhone and iPad in terms of mobile gaming, and could lure developers to bring more advanced games to the platform. With new, more powerful, tablets coming to Android in the near future, the addition of game controllers could kick off a new breed of tablet games, not limited by the touch screen.

I’m looking forward to learning more about this feature, and hope that we see a growth in gaming accessories for both Android and iPhone.