iPhone theft and Android smartphone theft is a growing problem for smartphone users that rely on their smartphones to hold life moments, banking information and much more. A new survey of smartphone owners show a majority of theft victims would likely pay $500 to $1,000 just to get their photos and data back.

We’ll take a look at the surprising and scary statistics behind Android and iPhone theft, and how you can make sure your photos and data are safe from a thief and how you can attempt to track down the stolen phone or wipe it to stop someone else from getting your personal data. 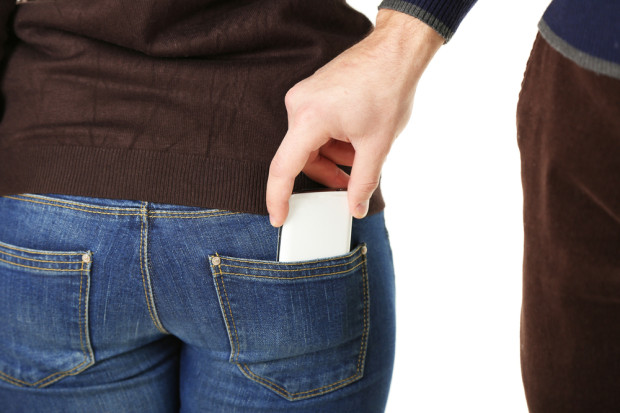 Android and iPhone theft is a big problem. Here is when and where it happens most and how you can stop it. (ShutterStock)

In this survey most phones were stolen when the owner left it behind somewhere in public. Restaurants, bars and nightclubs are particularly bad places to forget about your iPhone or Android and the theft is most likely to happen in the afternoon.

Lookout Mobile sponsored this survey of over 2,000 people, including at least 500 who were the victim of a stolen smartphone. iPhone theft topped the chart, but Android phone theft was right behind it, with others like BlackBerry and Windows Phone likely making up the rest of the stolen phone list. 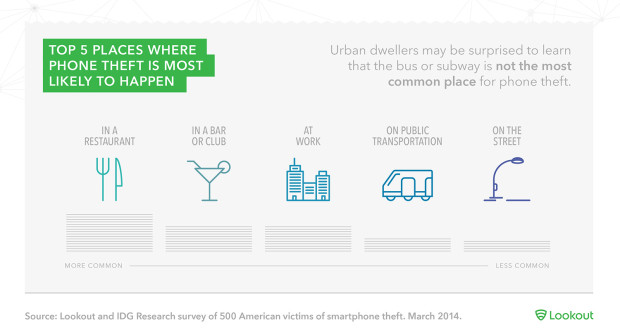 This is where smartphone theft is common.

44% of the phones were stolen because the owner left the phone behind, while 25% were the result of a direct theft off of the person or out of a house or car. For many users, simply being more aware of their smartphone is enough to prevent theft. There are iPhone cases like the BungeeAir Protect and others that will sound an alert on your keychain if you walk away from the iPhone. This small alert could make the difference between a moment without your phone and hours of lost time and lost data.

What happens when you lose an Android phone or iPhone to theft? While most users make out without identity theft, you’re certainly in for lost time and productivity while you try to track the phone down and or replace it.

Losing confidential company data could easily result in more than just lost time, and a stolen identity is a big deal. With the amount of information that we keep on our phones the data is often worth more than the device itself, but thankfully it seems most thieves simply want to turn the phone around for a quick buck.

50% of respondents said that they would be somewhat likely to extremely likely to pay $500 just for the data on their phone and 33% would pay $1,000 for the data including photos, videos and personal information.’ 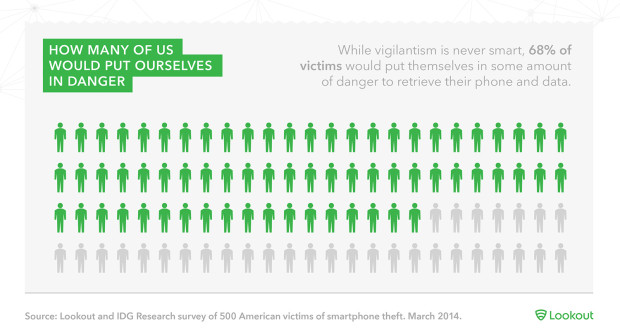 Many victims would take matters into their own hands.

Victims of smartphone theft report that they feel angry, annoyed, stressed, exposed and embarrassed by the problem. This is likely why 68% of respondents say they would put themselves in harms way to try to get their phone back. Using an app like Lookout, Find my iPhone or Android device manager to track down a lost or stolen phone can reunite a user with their phone, but  San Francisco District Attorney George Gascón told The New York Times, “Others have gotten hurt.”

Cmdr. Andrew Smith with the Los Angeles Police Department agrees, warning, “It’s just a phone — it’s not worth losing your life over,” he said. “Let police officers take care of it. We have backup, guns, radio, jackets — all that stuff civilians don’t have.”

What to Do if Your iPhone or Android is Stolen?

Before you lose your iPhone or Android phone to a thief you should do three things to make sure your data is safe, including photos and videos.

This won’t stop a thief from taking your iPhone or Android smartphone, but by turning a pass code on you will prevent most criminals from gaining access to your data.

On the iPhone go to Settings -> Touch ID & Passcode -> Turn Passcode on.

On Android go to Settings -> Lock Screen or Security -> Turn on Lock Screen. The Android instructions vary from device to device.

The next step is to automatically backup your data from the iPhone or Android. You can backup an iPhone to iCloud or to a computer and there are apps that can backup your photos and videos to the cloud for safety.

On the iPhone go to Settings -> iCloud -> Storage & Backup -> Turn iCloud Backup On. This will require enough storage space so it may be easier to turn on WiFi backups or to use an app like DropBox to auto backup your iPhone photos and videos.

On an Android phone you can use a variety of tools to auto backup your photos and videos and follow these instructions to perform a full backup and set up a bulletproof Android backup strategy.

If your iPhone or Android is stolen, tracking it down may be enough for you or the police to locate it and recover it. With these tools you can sound an alarm as well as find the location and possibly take photos of the surroundings. If that fails you can also use these tools to wipe the phone completely so that a thief will not have access to your information.

Remember that you need to try to locate the phone before you wipe it. Once you wipe the phone you cannot track it down.