It appears that the much rumored Nokia Normandy, a device that is believed to run a forked version of Google’s Android 4.4 KitKat operating system, may be launching as the Nokia X, a seeming departure from the Windows Phone Lumia and the feature phone Asha branding. It’s still unclear when the device would be announced, but the Nokia X could likely make a debut at Mobile World Congress next month in Barcelona, a venue where Nokia had already begun sending out press invitations to a yet to be disclosed announcement.

The official Nokia X branding was leaked by @evleaks on Twitter. Given that @evleaks has a good track record for unannounced leaks, we’re optimistic of the accuracy of this rumor.

The Normandy is an interesting device for the Finnish smartphone-maker. While Nokia had historically relied on the Symbian operating system to power its smartphones, the company had made a radical switch and commitment to Microsoft’s Windows Phone OS several years ago in a bid to stop continuing market share loss. However, with Normandy, it looks like Nokia’s exclusivity with Windows Phone is over and the company may be exploring other options. 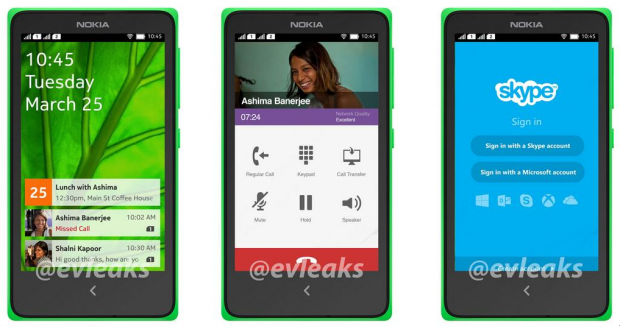 At its core, though, Normandy, or the Nokia X, may not be a direct challenger to some of Nokia’s most high profile smartphones, like the 41-megapixel Lumia 1020 or the new 6-inch Lumia 1520 phablet with quad-core processing. Rather, the Nokia X is said to be an entry level smartphone with an FWVGA display–the same resolution as the original Motorola Droid in fact–and the device could represent the next generation of Asha.

As Asha is based on the Series 40 (S40) platform, Nokia may be trying to migrate away from the aging non-smartphone operating system to something more modern.

If this is true, and the Nokia X is in fact running a forked version of Google’s Android operating system, Nokia may not have to develop much work on creating a backbone for the OS. It could rely on the underlying Android OS while layering on its custom user experience, much in the same way that Amazon is currently doing with its Kindle Fire tablet so that very little trace of Android remains.

The challenge for Nokia here is if it could create its own custom app store to sell these Android-based apps. While the number of Android apps on Google’s official Play Store is plentiful, Nokia won’t have access to Google Play if it uses a forked edition of KitKat, and therefore it must either rely on another third-party app store for Android, like Amazon’s App Store for Android, or create its own digital storefront to sell and market apps to consumers. It will also face the challenge of getting developers to re-submit apps already in Google’s Play Store to its own store if it chooses to go this route alone.

Another challenge would be releasing a phone with a rival OS when Nokia’s device division is in the midst of being acquired by Microsoft, which has its own Windows Phone OS.

It was previously reported that the Nokia Normandy may debut by March 25th so it’s still unclear whether Nokia will have the handset ready by Mobile World Congress in February.

It’s unclear how Nokia-Microsoft and Google will react given that the Nokia X may bear a strong naming resemblance to Google-owned Motorola’s Moto X flagship.