Android Smartphone Marketshare Rises; So Why Don't Devs Love Us?

comScore just released their November 2011 report on mobile subscribers. The data is mostly unchanged from August’s numbers, though there are interesting tidbits.

For example, Apple gained ground in the Top Mobile OEM category, a measurement of which companies sell the most actual phones. From August to November Apple went from 9.8% to 11.2% marketshare, no doubt owing to the introduction of the iPhone 4S and the price drop on the iPhone 4 and 3GS.

Apple is in 4th place on the OEM list, but iOS is the second most popular mobile operating system for smartphones at 28.7% marketshare. Android is on top at 46.9%, having gained 3.1% share since August. Perhaps coincidentally, RIM’s marketshare is down by exactly that amount in the same timeframe. 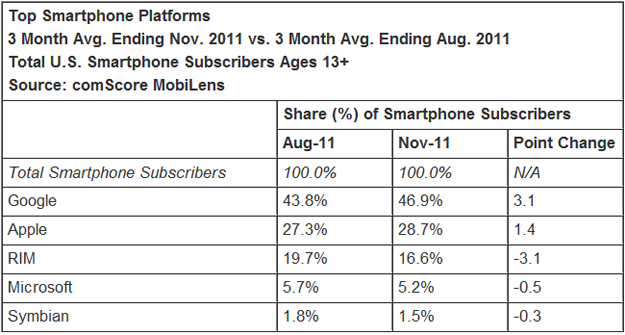 Android has almost half of the mobile marketshare thanks to the glut of Android handsets available. Three of the five top OEMs make Android phones, and you can find them on pretty much any U.S. carrier, even pre-paid ones, and at good prices.

These numbers don’t reflect the 3.7 million Android devices activated over Christmas weekend. With Android so dominant I wonder why it is that its users still get little love from developers.

A couple of weeks ago I wrote about how Apple’s App Store generates twice as much revenue as Android for devs, but Android has more free apps. However, apps that go with the freemium model on Android make more money than those on iOS.

It’s understandable that developers would want to put their effort into what will make them the most money, but given that Android marketshare is growing and that it is possible to make money yet satisfy Android users’ love of free things, why not tap into that 46.9% of the market?

And the revenue generating excuse falls apart for apps whose revenue comes not from the app itself, but from the service behind it. A commenter on the above linked post points out that: “ESPN’s app was total garbage on Android and took forever to get updates,” and “Android versions seem to have less features for no good reason and less polish for no good reason.”

I’ve noticed this, too. HootSuite’s Android app is atrocious when compared to the iOS version, for instance, and as a paying customer of that service I get annoyed every time I have to deal with it via my phone. I’m sure any number of you could call out specific apps and companies for shoddy development, slow updates, and fewer features. (In fact, I encourage you to in the comments.)

Small companies or independent developers facing this problem is understandable. Big companies have no excuse.

Given that it is possible to make money off of Android apps  — go freemium, insert ads, offer a free and pro/paid version — and that Android owners outnumber iPhone ones (and have for some time), it’s time for devs to step up and start paying more attention to Android.