Despite recent revelations from Android creator Andy Rubin that Google’s mobile operating system was originally designed for smart cameras before it was tweaked for the more popular smartphones that we’ve seen in the last few years, Android still has not been able to penetrate the smart camera market with much success despite the growing smart camera segment. Today, a number of camera manufacturers, including Sony, Samsung, Olympus, Panasonic, and others, are building cameras with wireless capabilities like WiFi, WiFi Direct, and NFC, to allow easy sharing of captured images and videos, but Android isn’t powering those systems.

While these new hardware capabilities are coming to cameras to allow for easy sharing of photos between your camera and your smartphone, TV, or laptop thanks to wireless features, they lack the Android OS, which would allow users to run familiar apps and upload images and videos directly from the camera, rather than sharing those captured memories to another device before getting uploaded to a social network. 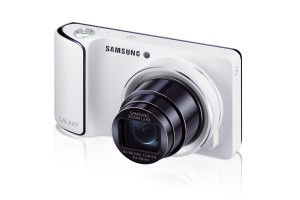 In the past, we’ve seen some Android devices launch with limited success. The Nikon Coolpix s800c didn’t really take off because of a more dated UI that was complicated by the use of Android navigation keys while Polaroid‘s concept was just that–a concept. Samsung’s Galaxy Camera was the most successful Android-powered smart camera to date, but it’s more targeted to consumers rather than enthusiasts or pro users.

Most recently, we’ve seen Samsung announce the mirrorless NX2000 camera with interchangeable lenses and WiFi built in while Olympus’ PEN E-P5 has been leaked in details with rumors of WiFi inclusion. Neither of these high-end cameras come with Android.

Still, there is some hope that Android may be coming to cameras in the future as manufacturers learn from their product portfolios. Samsung says that it had learned a lot from building the Galaxy Camera and this has led the company to refine the camera UI for its flagship Galaxy S4 launch, offering more visual menus and a smart touchscreen mode selection menu. Perhaps, it could even port back the lessons learned from the Galaxy S4 to its cameras in the future. And Sony’s rumored Honami phone is said to be bringing some Cyber-shot features to mobile. In time, though, Sony may try to create more synergy and port the Android camera experience back to its Cyber-shot, Alpha, and NEX range of shooters.

The capabilities are there. Samsung shows us that live filters can be implemented on a camera with the Galaxy S4. HTC shows us that Zoe, sharing, and low-light capabilities are possible without having to fight the megapixel war. Android is free to use and the Play Store has a large number of photo editing, sharing, and networking apps, including Google’s own Snapseed software.

And most recently, we’re beginning to see a new, unannounced Galaxy Camera make its way onto the Internet. The smart camera revolution with Android at its core may not have happened as smoothly or as quickly as we had anticipated, but hopefully it will come. If anything, smartphones have taught us that we can quickly capture a memory anytime, anywhere. Some of these smartphone users will want to graduate to a more capable camera soon.