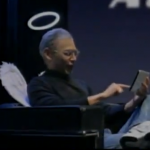 A commercial featuring a fake Steve Jobs is airing in Taiwan and stirring up controversy. Action Electronics hired a Taiwanese comedian to impersonate the late Apple co-founder to promote its Android tablet, something Jobs wouldn’t  have approved of.

Jobs didn’t hide his distaste of Android, Google’s mobile operating system.  In his biography, He threatened to go “thermonuclear” over what he called Google’s blatant rip-off of Apple’s iPhone.

In the commercial, the Steve Jobs impersonator wears jeans, a black turtleneck, angel wings  and a halo. Apparently, Jobs doesn’t care much for the iPhone or iPad and is now in the Android camp.  The commercial is brief, depicting Jobs hosting a keynote introducing a new ‘pad.’ The impersonator pulls the Action Pad out of his back pocket.

“Thank God I can finally play another pad,” he says at the end of the commercial.

There are about twice as many dislikes than likes of the commercial on YouTube, where it’s been viewed more than 80,000 times. While some commenters find the commercial humorous, others find it distasteful.

If Action Electronics was looking to garner attention with the commercial it’s certainly accomplished that goal. The focus of course is now on the Jobs impersonation rather than the Android 2.3 tablet it’s trying to sell.