The Android platform is growing at a blistering pace, adding 850,000 new phones or tablets every day according to Andy Rubin, Senior Vice President of Mobile at Google.

Kicking off Mobile World Congress 2012, Rubin shared that over 300 million Android devices are in use throughout the world, including 12 million tablets, a number made more impressive when you consider that this number doesn’t include the Kindle Fire or Nook Tablet, which don’t connect to Google in the same way as phones and traditional tablets.

Why should you, the average Android user care about the number of Android devices activated every day? 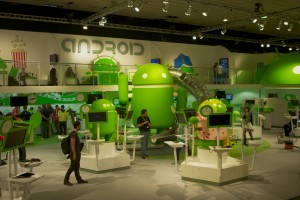 Rubin shared that the Android app market has over 450,000 apps available on the market, an increase from 150,000 during last year’s Mobile World Congress.

Android doesn’t have a shortage of apps, and most users can find the apps they want for Android phones, but there are key apps still missing. The most recent example is Instagram for Android, which has been available on the iPhone for nearly two years, but is still, Coming Soon™ to Android.

Google’s daily Android activations are more than double the number of iPhone sold by Apple every day during the last quarter, totaling 37 million iPhones sold during Q1 2012.