According to mobile ad tracker AdMob, Android smartphones took a 46% share of web traffic in the U.S. in March, topping the iPhone’s 39%. Worldwide, iPhone took 46% while Android took 25%. Great news for Android, but I have to wonder if it’s driving more traffic or just driving more ads. 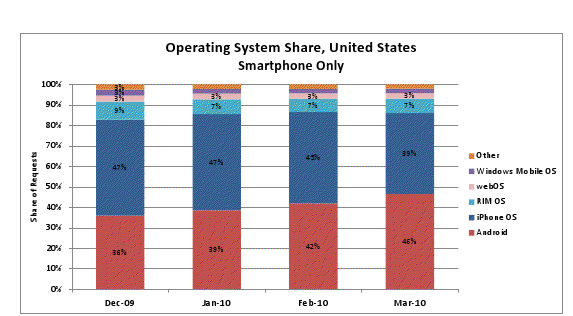 AdMob measures web traffic by ad impressions. View an ad on your mobile device and it adds to their count. In theory, overall traffic share can be extrapolated from that. However, of the operating systems being tracked, only Android, through Google, makes money on these ads, giving them incentive to push more ads to users.

Think about that. If an operating system and the company that supports it relies entirely advertising for income, wouldn’t they push more ads than their competitors? They’d have to. Sure, the others get a piece of the search engine action, but it’s not their bread and butter. In part, this is why search on Android includes the web, not just what’s on your phone. It’s how they make their money. I don’t have a problem with that, but I suspect the practice is skewing the ad-tracking metric.

Also, once iAd gets up and running, ads within iPhone apps will not be tracked by AdMob while Google ads in Android apps will still get counted. The situation will only get more cloudy as others develop their mobile ad strategies. Ad-tracking as a proxy for web traffic made sense back in the day, but in the Android era, I’m not so sure.