Google is once again trying to enter the living room with an all-in-one gaming and entertainment solution. But, as its name suggests, Google is leaving the extras behind and building an Apple TV and Fire TV competitor with its Android mobile operating system.

Google announced the new operating system for televisions and set-top boxes earlier today during its Google I/O developer press conference, showing off demos and detailing the features it’s packed in so that developers can create TV experiences.

Unlike the Apple TV or the Xbox One, Android TV is being marketed specifically towards hardware makers. That is to say, there’s no Android TV device. Instead it’s an operating system that Razer and Asus will build into new set-top boxes and Sony and Phillips will include in their smart televisions. 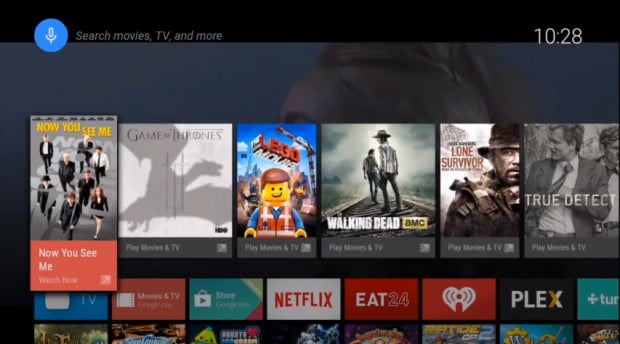 To make Android more palatable on televisions  Google has wrapped it in a large interface that’ll feel right at home on a television set. Android TV will automatically populate user’s home screen with the apps they most use. Navigating and browsing that home screen will require a remote, a video game controller or even an Android Wear watch.

Like with Bing on the Xbox One, Android TV users will be able to quickly find what shows they’re looking for thanks to built in voice search. Asking questions like the name of an actor who played a specific character in the Harry Potter movies will instantly get answer. Users will be able to mirror things to their television set from their Android smartphone or tablet.

Android will also act as a Google Cast device. That means users will be able to stream content to it from a web browser on their smartphone, tablet, desktop or laptop. Gaming will heavily figure into Android TV too. Users will be able to pair a Bluetooth controller with the device to play their favorite Android games like they would on a traditional gaming console.

That this functionality is already available in other places might lead some to think that this isn’t a big deal; that Android TV shouldn’t be taken seriously. Nothing could be further from the truth. For a set-top box to succeed it needs support from app makers and Android has them.

Instead of requiring that developers create new apps for their services, Android developers will be able to simply add a new interface on top of the apps they already have available in the Google Play Store. That means, that services like Crackle or Watch ABC will likely arrive in the Google Play Store more quickly since companies don’t have to build new apps from the ground up.

It doesn’t look like Google will act as a gate-keeper for the Android TV experience either, that means developers can create entertainment apps for Android TV on their own time. By comparison, services and developers have to work directly with Apple and Microsoft to get apps on the Apple TV and Xbox One. It’s a brilliant strategy, one that should pay off for Google if Android TV set-top boxes are popular enough.

That being said, the success of Android TV is hardly set in stone. Rumors of a revamped Apple TV have raged for ages. Amazon unveiled the FireTV, its own Android-powered set-top box that does almost everything that Android TV does, earlier this summer. Android TV will need to have some unique features before it’s taken seriously.

Then there’s the hardware question itself. Google didn’t share any information about pricing on Android TV devices. If they launch later this year and are priced to high against the Apple TV and FireTV it’s unlikely users will embrace them in large numbers. The FireTV and Apple TV both cost users $99.

Android TV isn’t to be confused with Google TV, the older operating system that Google hoped would catch on with users. It didn’t run Android but did boast hardware from Asus, and Vizio. Presumably Android TV will take Google TV’s space as the primary way for users to get a Google experience in their living room.