With the Apple Watch release nearing and orders starting to ship, Google is feeling the pressure and this week announced some major changes and improvements to Android Wear as a whole, its software for wearable like a smartwatch, aimed at taking on the Apple Watch. Google’s blog post detailed tons of new changes to Android Wear, ones that should make most of the already available smartwatches even better.

Since first being announced last year Android Wear hasn’t received too many updates. A few small updates surfaced here and there with new features, improvements to battery life, and small tweaks to the UI, but now the platform as a whole and its companion app are receiving the biggest update yet.

With the Apple Watch now here and offering tons of neat futures, loads of emojis and more, Google’s pushing an update out to level the playing field. Things like drawable emojis, always-on apps, more WiFi options and much much more. This is the biggest update to Android Wear yet.

Add in the fact that we’ve been hearing news and rumors that Google is working to get Android Wear on iOS for iPhone owners, and this update is even more important. Delivering more features to make Android Wear options like the Moto 360 more attractive, and potentially steal some sales from the Apple Watch. 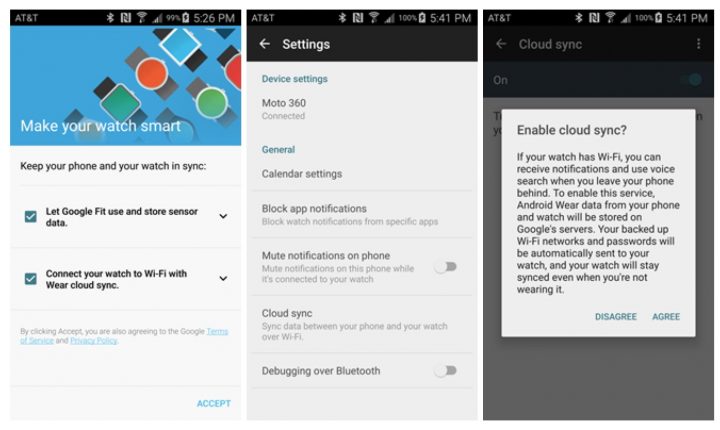 Individually all of the changes are pretty small and just useful little features, but add them all together and it makes Android Wear even more attractive, and offer as much as, or more than the Apple Watch. Most Android Wear watches have WiFi built-in, but it wasn’t being used. The watches pair to a smartphone with Bluetooth, which acts as the main hub and brain of the device. With this new update, that changes. If your watch has WiFi, you can now use your watch without a phone, all by connecting to WiFi and using Google’s cloud servers.

Apps now can always be running, even when the watch isn’t connected to a smartphone, and that’s because they can now sync and operate over WiFi. This update actually enables WiFi (which may affect battery life) and allows users to connect to a home WiFi network, vs only being able to sync to a smartphone over Bluetooth. This will allow you to do Google searches with your voice, send messages, read emails and more all when you’re not near your phone, and not in Bluetooth range. Something that was one of the weakest links of Android Wear. And if you lose your phone, you can use your watch and WiFi to find it. Pretty neat right?

There are also new hand gestures and even hand-drawn emoji. This is a neat thing where users can draw a smiley face with their finger, and the watch will try its best to match it to an emoji and send it in a text, email, or hangouts message reply. This makes things fun, more interactive, and easier than flipping through a selection of emojis on the small screen. That being said, Android Wear still need a smartphone to do most tasks, and they aren’t their own device like the Apple Watch.

Google’s also delivered a new low-power mode for the screen when you’re not actively looking at it. It allows apps to ambiently display just a minimal amount of data, usually in black and white, without turning on the screen. Android Wear already does this for the watch face, showing it in a low-power state, but now this feature extends to apps.

You can now flick your wrist to scroll through your watch feed, if you’re hands are full, and then respond with your voice even when your phone isn’t around. This makes using Android Wear easier, faster, more convenient, and doesn’t tie owners down to their phone. Making Android Wear more of its own device, even though it isn’t.

Last but not least the Android Wear app lets you control and manage multiple watches inside of the app, rather than disconnecting and reconnecting one at a time, for those who own more than one. It remembers each device specifically, its settings, notification setup, and more. The update also includes additional user interface changes, better controls, an easier to view calendar and more. We’ll be digging through everything once it arrives on more watches. Expect Android Wear v1.1 to hit the LG G Watch Urbane first, then your watch in the near future.