The Internet has been abuzz with news that Siri may have been cloned and magically transported to Android, giving iOS’s more open rival the chance to perform conversational voice commands and recognition. However, hope for a voice assistant feel flat when the clone, called Cluzee, was put to the test and failed to impress the tech world. In use, I find that Cluzee feels more clutzy when it comes to being an assistant. The app works fine when trying to launch commands–such as calling a contact, searching the web, or performing suggested commands–but beyond that, Cluzee isn’t as intelligent as Siri. If you stick to the suggested script–the lists of possible commands is shown when Cluzee loads–it will work fine, but deviate from its knowledge-base and Cluzee won’t be able to clue you in to what you’re seeking.

In a growing market of voice-based apps Cluzee will need to do more to stand out. Google’s Android OS already has basic voice recognition and commands built-in and other free apps like Vlingo launches faster than Cluzee and feel less clumsy. The app lacks the polish and intelligence that makes Siri a game-changer, and though Siri can always do more, I feel that it does enough right to give Apple an edge.

According to Extreme Tech‘s review of Cluzee, the site notes:

Like its name, the app is plagued with issues, and doesn’t have the same functionality that Siri offers. To test Cluzee, we gave it the five most popular Siri commands to see how it would handle them. Out of the five, it recognized one command successfully, force-closed on another, then simply refused to understand the other three. One out of five is bad, no matter how you cut it. 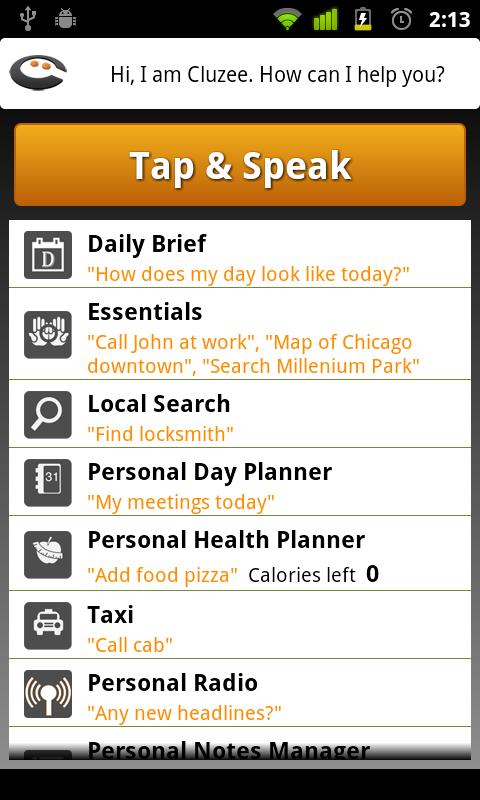 What Cluzee does well is aggregate a lot of basic functions into its voice app to be useful. For instance, the app itself comes with a calorie counter, and you can update how many calories you’ve consumed with your voice. For voice assistant apps to be truly successful, they will need to be integrated tighter at the OS level, like Siri, and have the SDK be freely available to developers so that users can update all apps rather than a few pre-configured ones–Siri still lacks native Facebook update commands, for example. Perhaps, in the future, voice will be as ubiquitous as touch is today, and we can do just about anything with voice, but today, at least there’s an app for that to get you through your day with basic tasks and functions. It’s a slow mobile evolution, but one that’s coming none the less.