Was there really a need for you to join the ranks of people who didn’t take the iPhone seriously? Because your comments at AsiaD make it sound like you are about to side with folks like RIM’s CEO and Steve Ballmer by saying silly things about what people do and don’t want.

Really Andy? You’re not sure? Perhaps you need to sit down and watch a little-known show I like called Star Trek. That might give you some clue as to how people want to be able to speak to their computers, phones, and other mobile devices.

Let’s break this down. First, a phone is a tool for communicating, yes, but smartphones are tools for communicating in different, more complex ways than the rotary dialing ancestor you appear to be thinking about. You’re not always communicating with people, sometimes you’re having a digital conversation with a nameless server somewhere using only words or, occasionally, collections of letters that might someday qualify as words. 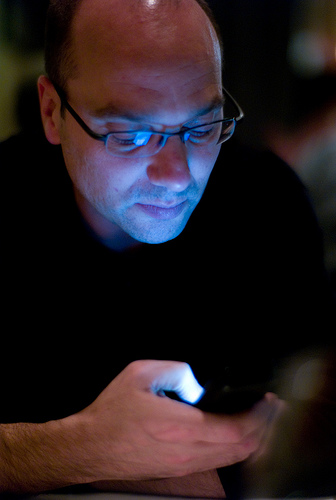 Second, why shouldn’t you be communicating with your phone, exactly? How does that break the rules? Why is this where you choose to draw a line? Is it only because Siri is for the iPhone 4S and not for Android? That’s not a valid reason. Dismiss your competition all you like, but don’t try and limit what “should” be done with devices because Apple outmaneuvered you.

Third, the whole point of Siri is to make communicating with others easier. Setting reminders, finding locations, sending text and tweets, all of that leads to an end game where you remember to talk to your mom, get to dinner with your sister on time, and easily tell your daughter off at college that you love her (or whatever). All things people do with their phones, except now they can do them with voice and not typing.

It’s a difference in input methods, not some sea change in how people fundamentally use phones.

Fourth, your assertion that people should only be communicating with people on the other side of the phone instead of letting your phone be an assistant sounds to me like what you’re saying is that people should just have assistants instead of using a phone for that purpose. Andy, I highly suggest you stay away from Occupy Wall Street protests, because the 99% are giving you the side-eye over that.

Not all of us can afford (or even want) a personal assistant at the other end of the line who can “remind me to call my dad when I leave work.”

Fifth, in the same interview you apparently said: “We’ll see how pervasive it gets.” We’ll see? Rubin, isn’t your job not to wait and see but to create, innovate, and make better devices that do things people want or need even if they don’t know they want or need them? Or are you going to leave that to Apple? Because we know how well the wait and see approach worked for Microsoft, Palm, and RIM. You’re not supposed to be that guy.

Last, I return to Star Trek. Because there’s no better illustration of why Google and Android need to take what Siri represents seriously. The way the characters interact with the ship’s computer, or any computer in that universe, is the way we all expected to be interacting with computers a long time ago. That it hasn’t happened yet is right up there with the frustration over a lack of flying car.

Now technology and coding has gotten us to the point where it’s approaching possible, and you’re sitting there telling me that my phone shouldn’t be able to do it. That I should be calling people, instead.

What, what, what are you doing, Andy Rubin?