This Thursday Rovio will bring Angry Birds Friends, its social bird-flinging game to iOS and Android for the first time.

Angry Birds Friends started life as a Facebook app last year, and currently has about 15 million daily users. The game uses familiar Angry Birds gameplay and lets players compete against their friends to get high scores. The social game also adds a number of power-ups which change-up the gameplay from the original game.

Angry Birds Friends uses the same birds as previous titles in the franchise, and adds in four new abilities to change the gameplay just a bit. The power-ups can show players exactly what trajectory their bird will fly in, make the bird giant for more destruction and increase the speed of each shot. 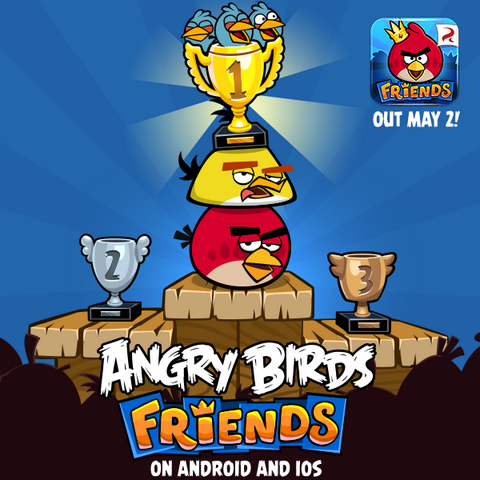 Players compete to get better scores than their friends each week, while using the available power-ups. The game rewards players for causing as much destruction as possible, adding to the replay value for even the best Angry Birds players. When players get bored, the game has a total of four gameplay modes to keep things interesting.

Like all social games, power-ups in Angry Birds Friends rely on a new in-game currency called Bird Coins. Players can earn Bird Coins by beating their friends in the competition. Presumably the app will also let players buy the coins through in-app purchases. There is no Mighty Eagle like other games in the series, however, as it doesn’t work well in a competitive game.

The Facebook version of Angry Birds Social is free to play in any browser, and it’s easy to imagine the iOS and Android versions will come to their respective stores for free as well. If the game is free on mobile devices, it will be the first free Angry Birds game that isn’t just a trial version.